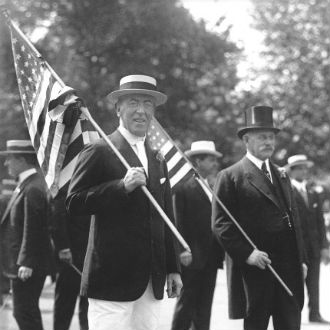 Why did it take so long for the United States to enter the war? Was Woodrow Wilson a pacifist?  Join Andrew in the Education Parlor of the Dolores Lescure Center to learn the answers to these and other question and travel the thorny road that was American neutrality. The presentation is free and open to the public. In addition, the WWPL will be handing out American flags free to guests on Flag Day.

President Woodrow Wilson established Flag Day with a Proclamation on May 30, 1916.  Wilson’s Proclamation began “I, therefore, suggest and request that throughout the nation, and if possible in every community, the 14th day of June be observed as Flag Day with special patriotic exercises, at which means shall be taken to give significant expression to our thoughtful love of America, our comprehension of the great mission of liberty and justice to which we have devoted ourselves as a people, our pride in the history and our enthusiasm for the political program of the nation, our determination to make it greater and purer with each generation, and our resolution to demonstrate to all the world its vital union in sentiment and purpose, accepting only those as true compatriots who feel as we do the compulsion of this supreme allegiance.”

The idea for Flag Day actually originated in 1885, when a Wisconsin public school teacher decided that his students should celebrate June 14 as “Flag Birthday.”  That day marked the 108th anniversary of the official adoption of the Stars and Stripes in 1777.  In 1949, 33 years after President Wilson’s proclamation, President Harry Truman signed an Act of Congress officially designating June 14th of each year as National Flag Day.