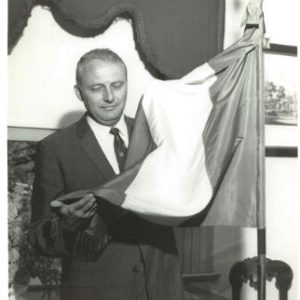 A 1919 Paris Peace Parade Conference Flag in the collection of the Woodrow Wilson Presidential Library & Museum (WWPL) has been selected for the Virginia Association of Museum’s (VAM) program, Virginia’s Top 10 Endangered Artifacts, for 2017-2018.

Ten unique artifacts from across the state and spanning Virginia’s extensive history from the 1700s to 20th century were chosen following a thorough review process by an independent selection committee of collections professionals from the Library of Virginia, Preservation Virginia, Virginia Conservation Association, and Virginia Department of Historic Resources. The complete list of artifacts and contact information for each honoree can be found at www.vatop10artifacts.org.

Robin von Seldeneck, President and CEO said, “We are delighted that Wilson’s Paris Peace flag was included in this year’s top ten endangered artifact list. The fact that Wilson kept this flag in his personal possession speaks volumes as it is a symbol of Wilson’s idealism in foreign policy”.

Thanks to a generous donation from the Blandford Rees Foundation, the Endangered Artifacts program will for the first time provide conservation awards totaling nearly $19,000 to the honorees, which will be granted by the Selection Committee or outcome of the online public voting competition taking place January 15 through 24 at midnight. The public is invited to help bestow $9,000 of these conservation awards by voting for their favorite endangered artifact.  The two artifacts receiving the most votes will be recognized as the People’s Choice Awards and receive $5,000 and $4,000 respectfully to conserve their artifacts and care for its continued preservation. Those wishing to make a lasting impact on preserving Virginia’s history are encouraged to vote daily at www.vatop10artifacts.org.

The People’s Choice Awards recipients and remaining honorees will be recognized during a special reception at the Virginia Historical Society in Richmond, Virginia on February 21, 2018 at 5:30 p.m. following Virginia Museums Advocacy Day at the General Assembly. They will additionally be acknowledged at VAM’s Statewide Annual Conference on March 12, 2018 during an awards luncheon to be held in Norfolk, Virginia.

The French flag was carried in the Paris Peace Conference Parade in June, 1919, celebrating the signing of the Treaty of Versailles and the end of what was then known as The Great War.  A French delegation gave the flag to President Woodrow Wilson, and he kept it in his personal possession after leaving the White House because of its special significance to him.  It was one of the first donations made by Wilson’s widow, Edith, to the then Woodrow Wilson Birthplace (now Woodrow Wilson Presidential Library) in the 1930s. The flag was prominently displayed at the Birthplace through the 1980s, but the flag’s deteriorating condition forced it to be removed to storage. With the help of the public and VAM, this artifact will return to the museum galleries to be shared with our visitors.

As we near the centennial of the Paris Peace Conference and the of World War I, this flag remains as a reminder of Wilsonian idealism- freedom, prosperity, peace, the protection of human rights, and the spread of democracy  that has been the hallmark of American foreign policy since the 1940s

Over the past six years, the Virginia Association of Museums has successfully promoted awareness of collections care and the efforts of museums, libraries, archives, and historic sites across the Commonwealth of Virginia and District of Columbia to care for their cultural and historical treasures, which is an expensive and time-consuming effort. In fact, over a 150 organizations have benefited from participating and the spotlight that the program has provided has generated extensive publicity, new supporters and volunteers, and access to funding to conserve and preserve their artifacts.

Virginia’s Top 10 Endangered Artifacts is a project of the Virginia Association of Museums and was originally funded through an Institute of Museum and Library Services (IMLS) Connecting to Collections Statewide Implementation Grant. Due to its success, the program has been replicated in other states and recognized as one of the most successful outcomes of the Connecting to Collections grant program.

The Woodrow Wilson Presidential Library & Museum is located at 20 N. Coalter Street in Staunton and includes Wilson’s birthplace, a museum, gardens, and a library and archive. The Museum is open from 9 a.m. to 5 p.m., Monday – Saturday, and 12 – 5 p.m. on Sundays. The WWPL’s archival collections are accessible through its website or by appointment. For additional information, call 540-885-0897 or visit www.woodrowwilson.org.