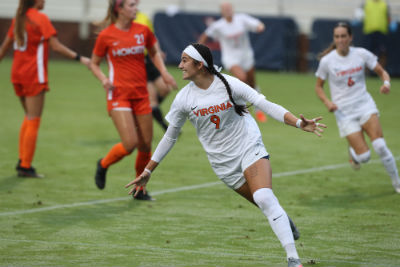 It’s football, technically more so than what we call football. And it involved Virginia and Virginia Tech. And COVID-19 had nothing to do with any of it.

The ‘Hoos got an early lead on a a goal from sophomore Diana Ordoñez, and stretched out the Hokies with second-half goals from from junior Alexa Spaanstra and freshman Lia Godfrey in what turned into a 3-1 win in the teams’ season opener at Klöckner Stadium on Saturday.

“It’s been a long time since we’ve been here playing, and I think both teams deserve a lot of credit for getting to this point,” Virginia head coach Steve Swanson said. “I think there are a lot of people who didn’t think this would happen – even as late as a week or so ago. I think there is some satisfaction there.”

The game kicked off roughly 10 hours after the two schools announced that the scheduled season opener in the other football, set for next Saturday, had been postponed because of COVID-19 issues involving the Tech squad.

Against that backdrop, the 2020-2021 Commonwealth Clash got off to a rollicking start on the pitch at Klöckner.

The ‘Hoos got on the board in the ninth minute when freshman Samar Guidry connected with Ordoñez. Guidry’s initial shot near the top of the box was blocked, but the freshman collected the rebound and played the ball ahead to Ordoñez, who was crashing toward the right corner of the six.

Ordoñez took the shot and sent it in to the far corner for the score.

It would remain a one-score game until the 79th minute, when Godfrey connected with Spaanstra on a perfectly placed corner, leading to a Spaanstra header that settled into the back of the net for a 2-0 UVA lead.

A long ball sent forward down the near sideline from the Cavaliers’ third by Ashlynn Serepca opened the field up for Cam Lexow on a breakaway toward the Hokies’ goal. Lexow sent a ball across the top of the box to an unmarked Godfrey, who sprinted down the field to help her teammate.

Godfrey sent the ball flying into the back of the net on the first touch to give the Cavaliers a 3-0 lead in the 83rd minute.

The Hokies got on the board in the 85th minute when a handball in the box was called against the Cavaliers, setting up a penalty kick for the visiting team. Junior Emily Gray lined up her shot and struck true to get Virginia Tech on the board, but that was all the Hokies would get on the night.

With the win, Virginia improved to 21-4-1 all-time against the Hokies.

“It’s always a physical battle with Virginia Tech, and we expected the kind of game we got tonight,” Swanson said. “We had to be smart about the decisions we made moving the ball. I think both teams aren’t as fit as they would be at this time normally. We got some good performances, and I think the two first years, Lia Godfrey and Samar Guidry, played well for their first game. But the best part is, we played.”

Virginia will return to action with a pair of road matches next week, traveling to face Duke on Thursday before continuing the road swing at Clemson on Sunday.

Story by Chris Graham with information from Virginia Athletics.