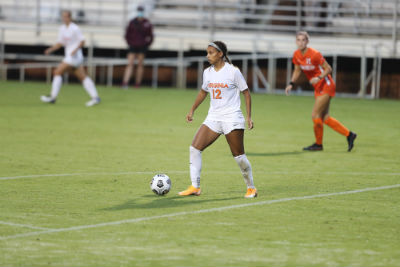 Constant anchored the back line for Virginia in the 1-0 overtime victory at Virginia Tech and scored the golden goal for the Cavaliers in the 94th minute, notching the game-winning goal with a header off a corner kick.

The junior logged all 94 minutes at center back, helping the Virginia defense limit the Hokies to six shots on goal en route to its first shutout of the year.

Brown helped lead top-ranked North Carolina to a 2-0 win at No. 7 Duke on Sunday, as the Tar Heels remained unbeaten on the year at 3-0 overall and in ACC play. The Cary, N.C., native scored her first career goal off a header in the 43rd minute after a great pass from Aleigh Gambone.

Bell, a 2020 Preseason All-ACC Selection and the 2019 ACC Freshman of the Year, was stellar on the back line for the Tar Heels, who limited the Blue Devils to just four shots on goal. The sophomore shut down several offensive attempts from Duke to help North Carolina post its second shutout of the season.