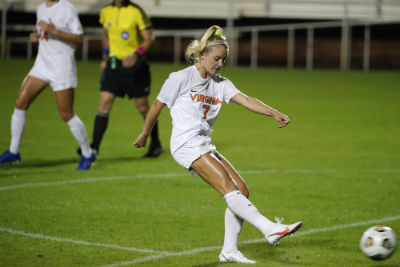 Junior forward Alexa Spaanstra made an immediate impact in her return to action on Thursday night as she scored both goals for No. 11 Virginia in a 2-0 victory over No. 13 Louisville at Klöckner Stadium.

Spaanstra, who had not seen action since an injury in the season’s third match at Clemson, returned to the lineup and net goals in the 24th and 34th minute.

Redshirt freshman Cayla White improved to 3-0-0 on the season as she posted her second shutout of the season.

The Cavaliers (5-1-1, 3-1-1 ACC) have posted three shutouts this season when White has started in goal, blanking Virginia Tech, Miami and the Cardinals.

“We’re really happy with the win,” said Virginia head coach Steve Swanson. “They are a tough team to break down and are very organized. At times we moved the ball well. We obviously converted in the first half, which really helped us. The first goal was going to be key, I felt, in this game.”

After several shots tipped over the crossbar, the Cavaliers finally struck in the 24th minute off the first of two first-half goals from Spaanstra. The Hoos played the ball around the box in an attempt to find an opening in the Louisville defense before swinging it out wide to Alissa Gorzak, who drove in toward the box before sending a cross over to Spaanstra.

The junior knocked it to her feet and skipped the shot low across the face of the goal and in past the back post.

Virginia struck again 10 minutes later when Ashlynn Serepca was taken down as she drove into the box to set up a penalty kick for the Cavaliers. Spaanstra lined up and drove the shot home to give Virginia the 2-0 lead.

The two-goal advantage would hold at the half as the Cavaliers had 12 shots with six on frame in the first half and held the Cardinals (3-2-0, 3-2-0 ACC) without a shot.

Despite a quick start from Louisville which resulted in one of the Cardinals’ two corner kicks in the half, Virginia dominated the possession clock in the second half. The Cavaliers outshot the Cardinals 12-2 forcing Louisville to come up with the save on seven attempts on goal.

The Cavaliers continued to apply pressure late into the half, taking four corner kicks and four shots in the final 11 minutes of play.

Virginia will return to action on Sunday when the Cavaliers host No 2 Florida State in a 3 p.m. contest on ESPN 2.