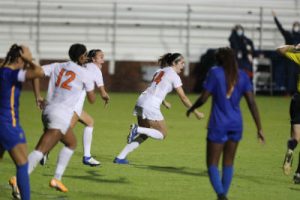 Sophomore Emma Dawson hit the golden goal in the 93rd minute, lifting #10 UVA to a 2-1 win over #14 Pitt at Klöckner Stadium on Thursday.

Sarah Clark delivered her second assist of the match as she served a ball toward the back post. Diana Ordoñez headed the ball back toward the center, where Dawson headed it up and over the Pitt defenders into the upper right corner for the win.

Virginia finished the match with a 30-to-4 shot advantage, as the ‘Hoos controlled play for most of the night.

“Pittsburgh is well organized, and Randy (Waldrum) has done a great job with them, and they are having a fine season,” Virginia head coach Steve Swanson said. “We knew they would come in with confidence and be hard to break down. These last two games have gone to overtime. On the positive side, we pulled them both out in overtime, but we feel like we should be taking care of our chances a lot more and making it a little bit easier for ourselves.”

The Hoos got on the board in the 17th minute when Clark connected with Ordoñez. Clark brought the ball down the right side of the field before sending a long service in over the top of the defense to Ordoñez inside the six.

The sophomore forward tapped it in low and to the left of the keeper from two yards out to give Virginia the 1-0 lead.

The one-goal lead held at half with the Cavaliers holding to a 13-to-2 advantage on shots after applying the bulk of the pressure in the opening frame.

A penalty kick in the 50th minute from Amanda West put the Panthers on the board with the equalizer. A collision between players as Pitt dribbled into the box set up the penalty kick for the equalizing goal.

Virginia got a chance to retake the lead in the 62nd minute when a handball in the box by Pitt set up a penalty kick for the Hoos. The chance sailed high, however, and the match remained tied at one.

At the end of regulation, the Cavaliers held a 27-to-4 edge in shots after limiting Pitt to only two chances in the second half – one of them the successful penalty kick – but the home team was unable to find the go-ahead goal and the game moved into overtime.

Virginia broke through for the second time in overtime when Dawson struck with her header in the 93rd minute to give the Cavaliers the victory.

Virginia will return to action on Sunday, hosting Miami in a 3 p.m. contest at Klöckner Stadium. The match will be broadcast on the ACC Network.