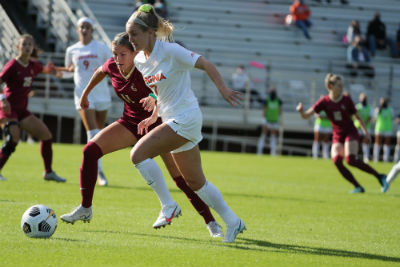 After giving up two early goals, the Cavaliers (5-2-1, 3-2-1 ACC) got a first-half goal from Alexa Spaanstra and a second-half goal from Diana Ordoñez as part of a rally to tie the match at 3-3.

Florida State (6-0-0, 6-0-0 ACC) would move back in front one last time, scoring in the 81st minute off a failed clearance following a corner kick to grab the 4-3 victory.

The match also featured an own goal for each team as part of a wild battle that saw each team surrender the most goals in a match for either side this season.

“We’re very disappointed in the result,” said Virginia head coach Steve Swanson. “Giving up four goals, especially the way they happened, those are on us. Give credit to Florida State. They took advantage of their chances. When we tied it up, they became the aggressor again and put the pedal to the metal down the stretch. We played some good soccer at times, but not as consistent as we need to be against a team like that.”

Virginia will return to action on Oct. 29, when the Cavaliers hit the road to face Boston College in a 6 p.m. contest on the ACC Network.