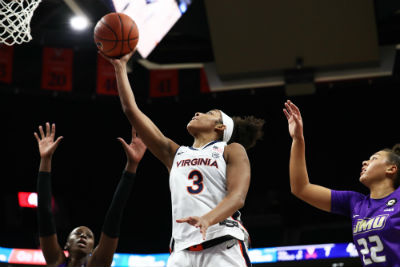 Aaliyah Pitts goes up for a shot at the rim against JMU. Photo courtesy UVA Athletics.

Virginia rallied to cut a 13-point fourth-quarter deficit to three in the final seconds, but that was as close as the ‘Hoos would get in a 71-67 loss to JMU on Thursday at JPJ.

JMU led by 13 points at the start of the fourth quarter, a deficit the Cavaliers whittled down to three with nine seconds remaining, but James Madison held on for the win.

Carole Miller had the hot hand for the Cavaliers early in the game, scoring eight points in the first quarter as UVA took a 13-12 advantage into the second period. Seven points in a three-minute span from Toi built the Cavaliers’ advantage to 22-17 with 5:38 remaining in the half.

With just over four minutes left in the period, the Dukes went on a 9-0 run which was halted by a jumper from sophomore forward Meg Jefferson.

JMU hit back-to-back threes, including one with 3.2 seconds remaining in the half, to take a 34-26 lead into the break.

James Madison came out of the locker room red hot, making nine of its first 12 shots in the second half, building up a 54-39 advantage. The Cavaliers went on a 7-0 run late in the quarter, including a pair of field goals from Jefferson, but Hazell hit a three for the Dukes to end the quarter and extend the lead back out to 59-48.

Miller hit a three-pointer with seven minutes remaining in the game to cut the deficit to single digits, 63-54. Sophomore guard Kaydan Lawson followed with a runner in the lane, starting a 9-2 UVA run that narrowed the gap to five, 65-60, with three minutes left in the game, but another three from the Dukes halted the run.

Virginia continued to fight with back-to-back layups from Toi making it a 68-64 game with 50 seconds remaining. JMU’s Kiki Jefferson hit a jumper with the shot clock expiring with 23.7 seconds remaining but UVA answered with Toi hitting her third trey of the game, making it a three-point game, 70-67.

UVA fouled Jefferson, sending her to the line with 3.9 seconds remaining. She missed the first but hit the second. The Cavaliers did not get off another shot before time expired.

“I’m proud of our kids fight in the game tonight,” UVA coach Tina Thompson said. “I thought that they executed well offensively. Probably our best game yet and we also played well defensively. We just had a tough time keeping JMU off the boards and they offensively rebounded incredibly. Any time you give up 20 offensive rebounds, it is going to be really tough to combat that. We did a good job of taking care of the ball. We continued to make youthful mistakes.

“I just kind of see a difference in just our effort and just being able to push through. It is a tough game to lose especially when you think that it’s a winnable one. We’re just going to keep working and keep plugging away at it and continue to get better.”