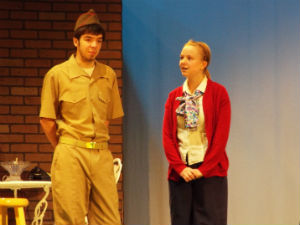 Kiss and Tell is a romantic comedy with lots of laughs and fun for the entire family. It is set in the 1940’s during World War II. The story focuses on the lives and relationships of neighboring families; the Archer’s, the Pringle’s and the Franklin’s. Audiences are transported to the backyard of the Archer home, to a simpler time where families mingle together and shared in each others’ lives.

Corliss Archer, a precocious 16-year-old, played by Mackenzie Griffith and Haley Sanders, leads viewers on a journey of love, relationships, and all the complications that make life a little more interesting then she bargains for. As Corliss says, “you can’t fight nature.”

Corliss and her best friend Mildred Pringle (Crysta Bliss) get into a bit of trouble when they decide to sell kisses to help the war effort. Their innocent attempt to support the good ‘ole USA sets off a firestorm of gaffes, misinformation, and cover-ups that push their parents to the brink. As their parents, Harry Archer (Michael Daley), Janet Archer (Audrey Fulk), and Dorothy Pringle (Clarice Ellinger) begin bickering and trying to keep the girls apart, life, love and complicated choices seem to get in the way.

Is Corliss having a “sordid affair,” and who’s pregnant? Will Corliss’s arch nemesis Dexter Franklin (Matt Tiahrt), sink her ship? Who will win the fight? Who will save the day? The chase for answers is on, and what follows is a series of misunderstandings, wrong assumptions, gossiping, fisticuffs and a collection of wonderful characters who add to the bedlam.

Tickets may be ordered online through a link on the Wilson Memorial High School webpage: http://www.augusta.k12.va.us/Page/4703, by emailing Diana Beam at dbeam@augusta.k12.va.us or by calling the school at 540.886.4286.