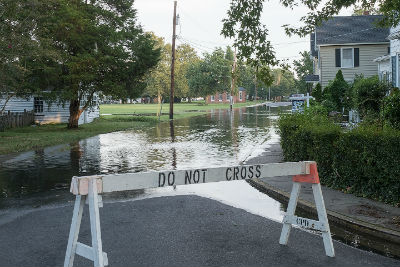 Those who live near the water around the Chesapeake Bay probably know this already, but now it’s official: Last year saw a lot more “sunny day” flooding than there used to be, according to a report issued Tuesday by the National Oceanic and Atmospheric Administration.

Sunny day flooding, also called high tide flooding, is unrelated to rainfall. Driven by rising sea level, the floods that decades ago happened only during a storm now occur more often: when the moon is full or winds “push” water upstream.

While the frequency of such events varies from year to year, the NOAA report warns that it’s only getting worse as climate change drives sea level higher.

“This is the new normal. It’s a floodier future,” said William Sweet, a NOAA oceanographer and lead author of the report.

Sunny day flooding inundated the nation’s coastal communities a median of four days in 2019. That’s a bit below the 2018 record of five days. But the trend over time, the report’s authors said, is on the rise.

Such “nuisance flooding,” as it’s sometimes called, occurs when water rises 1.75– 2 feet above the daily average high tide, covering streets or bubbling up from storm drains. The high water can block roads, damage buildings and public infrastructure, and poison low-lying cropland with salt.

Sunny day flooding is accelerating at 75% of the locations the agency monitors along the East and Gulf coasts, the report says. Nineteen places in those regions last year broke or tied previous records. Six were in Maryland and Virginia:

NOAA’s William Sweet, who lives in Annapolis, said he sees the trend first-hand, with new tidal flooding records regularly being set in the Bay. At 18 and 20 days, respectively, Annapolis and Lewisetta both set new records in 2018. In comparison, 20 years ago Annapolis averaged just two days of high tide flooding per year.

While the East Coast, in general, is prone to tidal flooding from northeast winds blowing water against the shore, Sweet said, the Chesapeake is even more vulnerable because winds from the south can also push water up the Bay.

The coming year may not see quite as much high water as last year. Sweet and his co-authors project that U.S. coastal communities will see an overall average of two to six days of flooding from May 2020 to April 2021. But the Northeast average could be six to 11 days.

In the Bay region, Annapolis is projected to have six to 10 days of high tide flooding over the coming year, with five to nine days forecast in Baltimore, six to 11 in the District of Columbia, and nine to 13 in Norfolk.

Over the next few decades, though, NOAA says high tide flooding is bound to worsen. The agency expects a national average of 7 to 15 days by 2030. Because climate change is causing sea level rise to accelerate, the agency forecasts 25 to 75 flood days by 2050.

Of the nine Bay communities featured in the NOAA report, the agency foresees sunny day flooding hitting them as many as 25 days by 2030 and up to 170 days by 2050.

Tim Wheeler is the Bay Journal’s associate editor and senior writer, based in Maryland. You can reach him at 410-409-3469 or twheeler@bayjournal.com. This article first appeared in the Bay Journal and was distributed by the Bay Journal News Service.