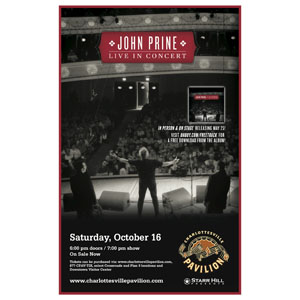 AugustaFreePress.com is giving away two tickets to the John Prine concert at the Charlottesville Pavilion Saturday night at 7 p.m.

To win, post a comment on the Augusta Free Press on Facebook giving us in 25 words or less a reason for us to give you the tickets.

The deadline to enter the contest is Wednesday at 5 p.m.

Here’s a brief sketch of Prine from the Charlottesville Pavilion website:

Some four decades since his remarkable debut, John Prine has stayed at the top of his game, both as a performer and songwriter. Recently honored at the Library of Congress by US Poet Laureate Ted Kooser, he’s been elevated from the annals of songwriters into the realm of bonafide American treasures.

Long considered a “songwriter’s songwriter,” John Prine is a rare talent who writes the songs other songwriters would sell their souls for. Evidence of this is the long list of songwriters who have recorded gems from his extensive catalog, including Johnny Cash, Bonnie Raitt, the Everly Brothers, John Denver, Kris Kristofferson, Carly Simon, Ben Harper, Joan Baez, and many others.

“He’s so good, we’re gonna have to break his fingers,” Kris Kristofferson once said after being justifiably stunned by a Prine performance. Bob Dylan remarked, “Beautiful songs… Nobody but Prine could write like that.” And now he’s back with a brand new live album, In Person & On Stage, which is perfectly balanced between classic hits and new treasures from his Grammy Award-winning Fair & Square. It’s a culmination of his last few years touring and features duet renditions of some of early songs such as “Angel From Montgomery” (here in a breathtaking duet with Emmylou Harris) as well as later ones like “Unwed Fathers” (with Iris DeMent) and one of the most poignant songs ever from a husband to a wife, “She Is My Everything.”

From “Long Monday” to “Saddle In The Rain” and “The Late John Garfield Blues (with Sara Watkins),” Prine’s songs are so hauntingly evocative of the laughter and tears inherent in the human condition, so purely precise and finely etched, that lines from them linger in our hearts and minds like dreams, separate from the songs.