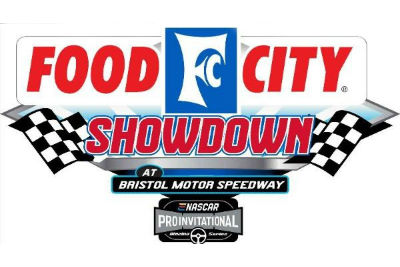 The Hendrick Motorsports driver who has over 1,500 races of experience under his belt in iRacing, led 116 laps of the Food City Invitational event and cruised to the checked flag for his first win in iRacing competition.

“It was a lot of fun and we had a pretty solid race,” said Byron, who will receive a traditional BMS Gladiator Sword for earning the victory. “We had to work through some track position and keep ourselves near the top five. Luckily, we were able to do that.”

After leading the first 75 laps Byron pitted, then with fresh tires worked his way back into the lead with 42 laps to go. He passed NASCAR Cup Series regular Chris Buescher and never looked back.  The win for Byron was redemption for the experienced iRacing veteran, who was bumped out of the way last week on the final lap at virtual Texas Motor Speedway as Timmy Hill took the win.

Byron won the first 50-lap heat race with a big lead over his challengers to earn the pole and then led most of the laps in the 150-lap main feature of the eNASCAR iRacing Pro Invitational Series race. He added that the virtual Bristol Motor Speedway was challenging, especially for some of his Cup peers, many of whom have limited experience in sim racing.

“It’s tough. There’s some that’s different (with virtual Bristol) but a lot that’s similar,” Byron continued. “This is one of the tracks I love coming to in the Cup car. Working on this track in the simulator during the off-season was helpful. To be able to run in front of a good group of guys and have some fun was really special. To finally close the deal (and win an iRacing Pro Series Invitational race) is really awesome. It’s cool for my sponsors and gives me some confidence.”

Byron added that “you saw some guys that weren’t as experienced get into it,” Byron said. “The top five or 10 guys really know what they are doing and those were the ones I was really worried about.”

But it wasn’t a comfortable Sunday afternoon drive for some of the other drivers.

Daniel Suarez and Kyle Larson tangled under caution and were promptly parked by iRacing officials.  It was the second consecutive week of discipline for Suarez and he was joined by Kyle Larson in cyber time out for the rest of the race.  Suarez later tweeted toward Larson that “If this was real life,  my amigo would get his butt kicked.”

Clint Bowyer, one of the least experienced iRacers on the track got bumped by Bubba Wallace and promptly declared, “I got Bubbaed!” adding, “I need a beer really badly.”  Wallace on the other hand, appeared to quit after the incident and declared on social media after the incident,  “That’s why I don’t take this (crap) serious. Peace out.”

The Richard Petty Motorsports driver would add comments later in a post that said, “I ruined so many peoples day by quitting a video game, Bahaha. A video game. Damn quarantine life is rough.”

Wallace also admitted to “rage quitting” and that didn’t sit well with Wallace’s sponsor for the race, Blue-Emu. “Bye bye Bubba. We’re interested in drivers, not quitters,” said in a tweet on the account of the topical pain reliever cream. The company added a second tweet using the image of Donald Trump uttering his “You’re Fired” catchphrase from “The Apprentice.”

But Clint Bowyer summed it up about the race in his straight forward, no holds barred commentary.  “There’s only one guy who leaves Bristol happy, and that’s the winner. Everybody else leaves mad. It was a lot of fun and it’s a really challenging race track in virtual racing as in real life.”

The Food City Invitational was the third iRace event for the NASCAR Cup Series stars since traditional racing was halted by the COVID-19 pandemic.