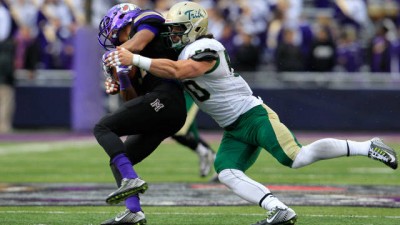 One of the nation’s top linebackers, Rhodes was recently selected to the Butkus Award Watch List, as he was the lone FCS player on the list that honors the country’s top collegiate linebackers. ASTATS FCS Preseason All-America First Team honoree, Rhodes was also chosen to the STATS FCS Defensive Player of the Year Watch List, which includes the nation’s top 22 defensive players at the FCS level, and garnered preseason All-CAA distinction.

Rhodes is a two-time first-team all-conference selection and a three-time all-league honoree. During the past two seasons, the Hollidaysburg, Pa., native has totaled 191 tackles, 10.5 tackles for a loss, 5.5 sacks, three forced fumbles, one fumble recovery and 15 PBU.

An outstanding leader, Rhodes is a two-time team captain, which makes him just the 11th player to earn the honor multiple times in the program’s 122-year history.

The Tribe will open the 2015 season at Lafayette on Sept. 5, while it will host Stony Brook for its home opener on Sept. 26.

Tickets are available for purchase online at TribeAthletics.com or by calling or visiting the Tribe Ticket Office in W&M Hall at 757-221-3340.

In addition to enjoying all the action during the 2015 campaign, Tribe season ticket holders this fall will benefit by improving their opportunity for preferred seating when the renovated Zable Stadium opens in 2016.