Why does anybody pay any attention anymore to Dick Cheney? 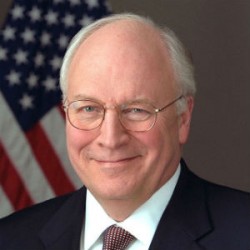 Dick Cheney, as shadow president, lied us into a war that set America back for a generation, so he’s as qualified as anybody to speak on bad presidents.

Cheney, speaking to conservative radio blowhard Hugh Hewitt to promote his latest book, made it clear that he doesn’t like Barack Obama.

“I think his actions constitute in my mind those of the worst president we’ve ever had,” Cheney said in the radio spot.

Takes one to know one, right?

Credit to Cheney for knowing how to throw the red meat to the base, shrinking though it may be.

The interview covered the usual line of crap about Obama being a weak liberal who wants to “take America down, “fundamentally weaken our position in the world” and “turn our back on our allies and encourage our adversaries.”

This from the architect of the faux danger that Iraq under Saddam Hussein posed to U.S. security, who underestimated what would be necessary to win the peace after winning the war, which subsequently pushed the country to near-bankruptcy in large part because the architect also wanted to give his rich benefactors massive tax cuts even as he was dragging us into a costly permanent war.

Precisely because of Dick Cheney, our nation’s position in the world is fundamentally weakened, and in pursuing the course of action that he laid out, we had to turn our back on our allies and encouraged our adversaries.

Dick Cheney: the worst shadow president we’ve ever had.

Treason charges would be too kind.