Which cars are involved in the Takata airbag recall? 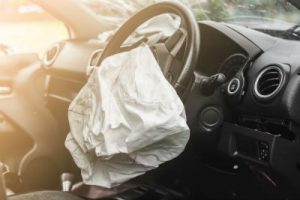 Airbags, once safety options found in luxury vehicles have now become the standard across almost every make and model of cars sold in the United States. While vehicles first only included driver’s side airbags, many models now come with passenger-side airbags as a standard option. Many more are adding side airbags in case of an accident involving the back seat. However, not all airbags are safe, as Takata found out.

Takata, a Japanese airbag manufacturer, began making airbag inflators with an ammonium nitrate propellant in 1999. As early as the year 2000, there is evidence that the company was aware that the inflators were not functioning correctly and that some had erupted in tests. In 2004, an unnamed company executive admitted to manipulating test data on the inflators.

Since the recalls began in 2008, millions of vehicles equipped with the defective airbags have been recalled, affecting 19 different auto manufacturers selling cars in the United States. The cause of the defect was also determined: the chemical propellant degrades over time. This degradation can be hastened, especially in vehicles in warm, humid climates.

By March 2019, the recall had affected some 41.6 million vehicles in the U.S. alone. Those recalls came too late for 16 people in the United States who have been killed by the faulty airbags. For some people, the recalls have not come at all.

Auto manufacturers have been trying to reach out to owners, first through regular mail. However, some owners moved or sold their vehicles without the manufacturers receiving notice. Some manufacturers, like Toyota and Honda, have taken to social media to warn owners that their cars have recalls. There were even shortages of replacement parts for some vehicles, affecting recall and repair efforts.

According to the NHTSA’s website, the recall is expected to encompass a total of 65-70 million affected airbags.

The airbags do not take a hard crash to deploy. In December of 2017, a teenager from Texas died while driving a 2002 Honda Civic when his airbag deployed after a minor accident. According to police, the teen should have been able to walk away from the crash, had deadly shrapnel sprayed from the airbag not hit him.

If you want to know if you are driving an affected vehicle, the best way to find out is to check the complete Takata airbag recall list. Many manufacturers have ways to check for recalls on their websites. However, you can also visit the NHTSA’s official recall website and put in your vehicle identification number.