Imagine a new breed of pirate not only able to sail the high seas, but to exploit nearly any mode of transportation without detection. And these raiders’ ambitions have little to do with amassing treasure and everything to do with hijacking ecosystems.

Today’s invasive species are as tenacious and resilient as the pirates of yesteryear, and when these plunderers set foot in new locations around the world, they know how to make themselves at home. As a result, home will never be the same for many native residents. 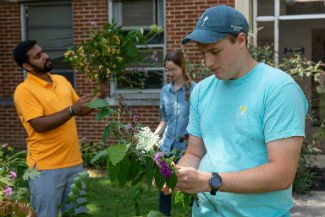 Jacob Barney, associate professor in the College of Agriculture and Life Sciences’ School of Plant and Environmental Sciences, graduate researcher Becky Fletcher, and a team of five other doctoral students conducted the first-ever comprehensive meta-analytic review examining the ecological impacts of invasive plants by exploring how animals – indigenous and exotic – respond to these nonnative plants. Their study, which took place over a two-year period, is published in the journal Global Change Biology.

“Individual studies are system-specific, but we wanted to look for commonalities about how animals respond to invasive species. Our findings suggest that the impacts of invasive plants are much worse than we thought,” said Barney. “Exotic animals’ ability to survive on invasive plants coupled with the reduction of native animals is almost a worst-case scenario.”

The team’s findings underscore the negative impact of invasive plant species on native animal populations – populations that include worms, birds, and a host of mammals and other vertebrates – all of whom serve a multitude of important ecosystem functions across a range of trophic levels. Only mollusks and arthropods were unaffected.

“We had reason to believe that native and exotic animals may respond differently to invasive plants,” said Fletcher, a Kansas City native who is completing her doctorate in invasive plant ecology, and the paper’s lead author. “We hypothesized that exotic plants may increase the abundance of exotic animals while reducing the abundance of native animals.”

As it turns out, invasive plants had no impact on the abundance of exotic animals. The plants do not facilitate exotic animals, nor do they harm them. In essence, nonnative flora provides sufficient nourishment and other benefits to uphold, if not to enlarge, nonnative animal populations. On the other hand, native animals are diminishing as invasive plants gain a foothold in their habitats.

“Invasive species are one of the five drivers of global change. Just as human-induced phenomena, such as land use disturbance, climate change, and disease, are re-shaping our ecosystems, the same is true for invasive plants and animals,” said Barney, who is also a fellow in the Fralin Life Sciences Institute and an affiliate of the Global Change Center. “Our world will witness even more invasions over time. So, we must understand the body of research because it will drive conservation efforts.”

As a result of human activity, invasive plant and animal species now encircle the planet, colonizing terrestrial, aquatic, and marine environments, and suffusing every ocean and continent. In addition to their ability to displace native plants and animals, invasive species reduce wildlife habitat and alter natural processes. These environmental damages are often amplified by cascading impacts on other associated species and systems, including deforestation, storm water runoff, reduced groundwater, increased risk of wildfires, and the introduction of pathogens. Such sweeping losses also reap severe economic repercussions. While invasive insects cost the agricultural industry $13 billion in crops annually, collectively, invasive species – plants, animals, and diseases – cause an estimated $120 billion in damages each year in the United States alone.

A worst-case scenario feared by some researchers is invasion meltdown, which hypothesizes that once an exotic species – plant or animal – becomes abundant in an area, the ecosystem may change in such a way that facilitates the establishment of additional invaders. While Barney’s study was not designed to test invasion meltdown, the scenario is not so far-fetched.

“In the context of biodiversity, we are worried about the impact invasive species are having on diversity and ecosystems,” said Fletcher.

The researchers cite studies showing that native cardinals nesting in invasive Lonicera maackii shrubs fledged 20 percent fewer offspring. The team also discovered that animals in wet ecosystems were more impacted than in dry ecosystems. Rivers, already more nutrient-rich than terrestrial systems, are subject to frequent and intense disruptions such as flooding that can flow debris, seeds, and vegetation to new locales.

“As a result of climate change and land-use disturbance, species homogenization is the new normal,” said Barney, pointing out another challenge for researchers. “So, identifying nativity, the place a plant or animal has long existed, is becoming much harder. We need to document what is native versus exotic in every system as this will better inform our understanding of the effects of invasive plants.”

This information, coupled with better taxonomic identification of the animals impacted by invasive plants, could shed light on whether invasive species are the arbiters of global change or merely the victims.

“For 20 years, I’ve conducted experiments on individual species to learn about them,” said Barney. “This was the first time I’ve been able to do a large-scale study looking at big picture consequences. This approach was refreshing and allowed us to ask questions that have larger implications and look at larger trends. Working with six Ph.D. students was also a nice team effort. We coordinated well and approached this as a team of equals.”