When debris in a roadway contributes to an accident 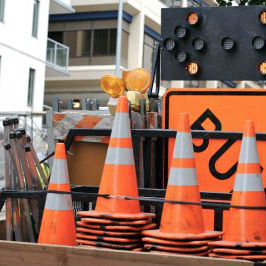 There is a duty incumbent upon all of us to use reasonable care and caution when driving a motor vehicle on any roadway. If we created a dangerous condition on a road, and we knew or should have known about it, we can be held liable for any injuries or deaths that the condition caused or contributed to.

When there are objects on an auto, truck or trailer that might fall off of it, we must also be aware of the fact that we might need to take evasive maneuvers to avoid hitting them.  That’s not only for our own personal safety but also for the safety of other drivers and passengers on the roadway.

How is Liability Determined When Road Debris Contributes to an Accident?

The fact that a driver struck an object on the road and propelled it into the air through the windshield of another vehicle and injured or killed somebody else on the road isn’t sufficient to hold that leading driver liable for negligence.

“These cases can be similar to hit and run cases, in that the vehicle ultimately responsible for the accident is never found,” says Little Rock Truck Accident Attorney, James Bartolomei of Duncan Firm.  “Unless there is a witness who sees the debris flying off the back of the truck, it can be difficult for the victim to receive the proper compensation.”

Neither is the fact that he or she failed to maneuver their vehicle to avoid it. That’s because the liability issue turns on the totality of the circumstances surrounding hitting an object that should never have been on the roadway.

“In urban areas, for example, the 405 freeway in Los Angeles, you would have a higher chance to find accident video, however, you would need to act quickly to acquire it, before it is deleted, sometimes you only have 30 days,” says Bartolomei.

At best, there might be an eyewitness to debris falling off an offending vehicle, and that might support an uninsured motorist claim in some states under some insurance policies. Unfortunately, the driver of the vehicle that the debris fell off is usually long gone from the scene. If he or she remains at the scene, a duty arises to remove the debris from the roadway at the earliest safe opportunity.

Should no such opportunity present itself, that driver must notify either law enforcement or the appropriate governmental entity. If that driver doesn’t remain on the scene, the duty to remove the debris might fall on the government entity that is responsible for maintaining the roadway.

Different government entities are ordinarily responsible for the maintenance of roadways.  The agency that is responsible for a particular road will typically remove debris from it.  In the event of a failure to remove debris from a roadway, an agency’s failure to remove it might result in a determination of liability against the agency. A person claiming injury or the death of a family member will be required to prove the following:

Road debris cases are highly fact specific. If you were injured, or a family member died as a result of an accident involving debris on a roadway, arrange for a consultation as soon as possible with a qualified and effective personal injury lawyer. He or she can answer your questions and advise you of your complete range of legal options.