What’s the Columbus Day debate all about?

Front Page » Business » What’s the Columbus Day debate all about? 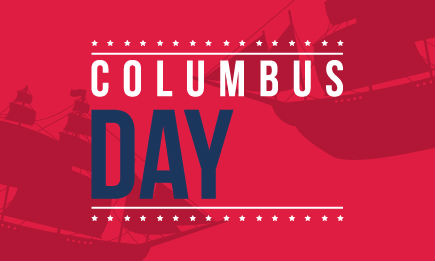 Communities around the country are wading into a debate that’s ongoing right now—to continue celebrating Columbus Day or not? Columbus Day celebrations are waning, which goes against what most of us were taught in school, which is that Columbus discovered the New World and should be celebrated as such.

The word discovery is one of the key points of debate when it comes to Columbus Day, so what should you know?

What is Columbus Day?

You may not have given much thought to Columbus Day in the past—it was just another symbolic holiday that might have meant a day off school or work.

Columbus Day is still currently a national holiday in the Americas, and it’s intended to mark the arrival of Christopher Columbus to the Americas on October 12, 1492.

The Italian explorer sailed across the Atlantic Ocean on a quest to find a faster route to the Far East, but ultimately he ended up in what was called the New World. The celebration of Columbus Day was recorded as part of American history as early as 1792.

The extent to which Columbus Day is celebrated in different parts of the country varies pretty significantly. For example, in some places, there are large-scale parades, while in other places, there’s not much celebration at all. New York City has the largest Columbus Day parade, and San Francisco has one of the oldest ongoing celebrations that heavily involves the city’s Italian-American community.

Columbus Day is a legal holiday on the mainland United States, as well as Puerto Rico, which is a U.S. territory.

Why Is Columbus Day Controversial?

While the controversy surrounding Christopher Columbus isn’t new, it’s gotten a lot more attention in recent years, similarly to the fact that many cities and towns are trying to find ways to deal with Confederate statues and monuments.

When Christopher Columbus came to the New World, he encountered indigenous people. History tells us that he used violence and slavery against these people, forced them into Christianity, and introduced new diseases that significantly impacted Native Americans.

According to journal writings, on his first day in the New World, Columbus ordered six natives to be seized as servants. These practices of forced labor continued during his time in the New World. Many natives were killed in places such as the Dominican Republic, and there were severe tactics taken to prevent revolt.

The idea of Indigenous Peoples Day is traced back to the early 1990s in Berkeley, California. Now, there are quite a few cities around the country that celebrate the same, including Seattle, Phoenix, and Austin. In Columbus, Ohio, the city honors veterans instead of Columbus Day.

Different tribal governments in Oklahoma have designated the day as Native American Day, or they may name it after their particular tribe.

This year in Washington D.C.. there was no Columbus Day because the D.C. council voted to temporarily replace it with Indigenous Peoples’ Day. The hope among Councilmembers is that the change will become permanent.

Proponents of shifting from Columbus Day to Indigenous Peoples’ day feel that it brings awareness to the fact that they don’t want to glorify someone as a hero who caused harm to the native people of the country and caused genocide or attempted to cause genocide on an entire population.

The move away from Columbus Day is being met with its own pushback, however.

For example, many people who have Italian heritage feel that Columbus Day is a time for them to celebrate that and the contributions of Italian-Americans to the country. Columbus Day first came to be when Italians were facing discrimination in terms of ethnicity and religion.

For example, one of the first official commemorations of the holiday came after there was a mass lynching of 11 Italian-Americans in New Orleans.

Italian Americans really connected themselves to the holiday in many ways to combat the discrimination they faced. Columbus Day can represent to supporters a time to celebrate finding safety and acceptance in their new home country.

In 2017, someone vandalized the Christopher Columbus statue in Central Park in New York City. John M. Viola, who was then the President and Chief Operating Officer of the National Italian American Foundation wrote an editorial in the New York Times.

He pointed out that tearing down history doesn’t change history. He called for better ways to eradicate racism rather than inciting it, and for the reimagining of holidays to represent new values for the future.

He said in his editorial that Christopher Columbus represents values such as discovery and risk, and those values are central to the American Dream, which is why it’s so important to maintain his legacy.

Opponents of Columbus Day say they want to recognize the contributions of Italian Americans, but there are better ways to do it. Some people who are in favor of abolishing Columbus Day say that it whitewashes history and can cause harm in people who feel like they are forced to celebrate something painful for them.

According to the Pew Research Center, Columbus Day is the most inconsistently recognized and celebrated holiday in the U.S.

So what does all this mean for the fate of Columbus Day? While there’s no way to tell for sure, it does seem like celebrations of the holiday are continuing to decline.

It shows us that moving forward, some in the country want to see fundamental shifts in how certain issues are addressed and confronted, and there are two very strong sides on both spectrums of the Columbus Day debate. It does represent an interesting time as people work to find ways to honor the history of our country without causing emotional harm to people who reside here