What to do when an employee resigns 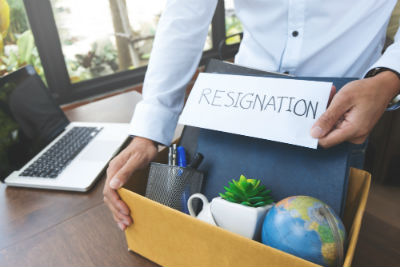 Employee resignation can be a complex ordeal but it can also be as simple as letting the employee go. Depending on the nature of the resignation and the circumstance, an employer has a variety of possible responses. For a poor separation it may be necessary to protect the company by having legal documentation signed. In addition, having to look for a new employee takes time and money. With this complex situation there are so many ways to approach the issue. Below are things that should be done in the event an employee resigns.

An employee separation agreement is a document that must be signed by both parties to take effect. In essence a separation agreement is an agreement by both parties to have a smooth separation. Within the document the employee resigning forfeits their right to sue the company they were previously employed with. This is especially important in the event of a poor employee company relationship.. Resolving the issue before the individual leaves is a great way in reducing the chance that the employee will pursue the company legally.

A non-compete agreement is a document that ensures the individual resigning does not seek a job with a direct competitor. This is an incredibly important document that needs to be signed as it reduces the leakage of insider information. If this document is not signed, a competing company can go and hire the individual and may probe them about specific details of the company. This gives the competitor an unfair advantage. This also reduces the risk of information being leaked to other competitors within the same business, All of these scenarios are avoided if a non-compete agreement is signed.

For businesses that are developing the latest and greatest products it is important to keep the secrets of how these are developed to the company. For employees that are familiar with a specific process of making a good or service it is wise to get a non-disclosure agreement. In this agreement the resignee agrees to not disclose information about their work at the company and reduces the risk of data leakage.

Possibly one of the most important things to do in the event of an employee resignation is to give an exit survey. Within this survey, questions mainly revolve around figuring out why the employee is leaving the company, where they are going, and if there are any issues the company is unaware of. For example if a lower level employee chooses to resign but is not given an exit survey the company would have never known that their boss mistreated them. An exit survey allows issues like this to come to the attention of the business which allows them to better adjust and learn.

A non-disparagement agreement is an agreement that protects the company from a resigned employee disparaging the company publicly. If this document is left unsigned an employer as able to go to the press and describe a potentially distasteful event that had occurred while working at a company. This could then lead to public outcry and ultimately a lot of money.

Overall an employee resignation is not the end of the world. People move on from jobs and go on to do greater and better things. Being prepared for the worst is simply a part of being a company and doing so will reduce backlash to the business significantly. As the saying goes it is always better to be safe than sorry. Once all of these documents are signed it is then time to determine if there needs to be someone hired to refill the vacant spot.