What happened to the once, fleetingly, stout Virginia D? 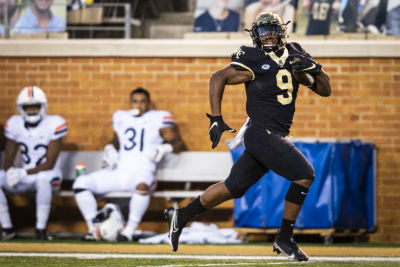 If you had Defense Consistently Gets Taken to the Woodshed in your Why Virginia Is Going to Flub in 2020 virtual office pool, ding, ding, ding, you win the pony.

But for the life of me, no, I didn’t see this one coming.

The offense regressing, sure.

Bryce Perkins set all kinds of records as he carried the team on his back to the Orange Bowl in 2019.

You have the most experienced offensive line in the ACC, OK, maybe we can simplify things for the new starting QB, Brennan Armstrong.

But the backbone of the 2020 Cavaliers is going to be its D.

This is a veteran unit five years in the making, exactly what Bronco Mendenhall, a defensive guru, wants in his defenses: versatile, stout, fast, swarming, able to pressure from all angles.

Opponents are scoring 34.8 points per game – up more than a touchdown from 2019.

Big plays were an issue again on Saturday. Wake scored on its first drive on a 40-yard jump ball from Sam Hartman to 6’5” wideout A.T. Perry, and got a short TD run on its second drive after another jump ball from Hartman to Jacquarii Roberson.

It was a 75-yard TD run by Kenneth Walker III in the fourth quarter that broke a 23-23 tie, and the backs of a defense that, stunningly, can’t seem to get out of its own way when the stakes are highest.

The Deacs gained 309 yards through the air on 16 Hartman completions. The game plan from defensive coordinator Nick Howell seemed intent on getting pressure on Hartman, and though the ‘Hoos did get to him for three sacks – two from Briggs, one from Taylor – when they didn’t get to him, he picked the secondary apart.

Mendenhall acknowledged as much postgame.

“The secondary is giving up a just too many too many deep passes not playing the ball well. The yards per catch today was around 16, I think, yards per catch. The yardage jumps really fast when we’re not making plays on the football. The secondary, more than any other position, controls points,” Mendenhall said.

It’s not just the secondary, though.

The front isn’t getting pressure on the QB, isn’t controlling the run game.

Nick Grant was totally out of position on the long Walker TD in the fourth.

This is a veteran unit playing like a bunch of cast-offs.