What does the QB spot look like for Virginia going forward? 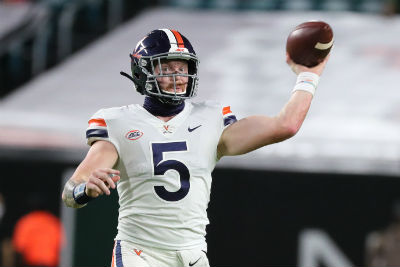 UVA offensive coordinator Robert Anae was able to cobble together a decent game plan for the Wake Forest game without having starting QB Brennan Armstrong in the lineup.

The three-quarterback rotation with Lindell Stone, Keytaon Thompson and Iraken Armstead was actually pretty productive in the 40-23 loss.

The Virginia offense gained 420 yards, and the QBs combined for 202 passing yards and 144 yards on the ground.

Armstrong returned for last weekend’s game at #11 Miami, and Anae decided that he wanted to use some of what had worked the previous week with Thompson and Armstead in the wildcat – going with them for 10 snaps, nine of them running plays that resulted in 46 yards, one a reverse that ended up with the ball in Armstrong’s hands, a trick play that led to an incomplete pass.

“We’re a different team with Brennan. The throws he can make, how tough he is when he scrambles, just his leadership style,” Virginia head coach Bronco Mendenhall said. “I watched from the sideline against Miami, and this team, this year, went to Miami, as well as going to Clemson, and played with more resolve and more consistent spirit than playing Clemson and Miami a year ago.

“Even though we didn’t have the outcomes that we wanted, man, I liked this year’s team’s effort and mindset better, and I think Brennan has a lot to do with that. So, he makes a difference for us, even though it hasn’t shown on the outcome yet.”

OK, so, then, what about that QB rotation?

If Armstrong is the guy, and he clearly is, does it make sense to run 10 snaps with another quarterback in the backfield?

“The run game boost and play action boost we’re getting from KT and then some of the things that Ira’s bringing, man, we think they’re really helping us move the football. They’re added weapons and athletes on the field at a time where, yeah, some of the skill players that we have, especially at wideout, are a little bit limited or hurt, or the depth isn’t quite what it used to be,” Mendenhall said.

The QB group had another productive bottom line in the Miami loss: 181 passing yards, 137 yards rushing.

Mendenhall conceded that the rotation can’t become predictable – basically, Thompson, who competed in training camp for the QB1 spot before suffering a shoulder injury, and Armstead, a true freshman who earned high praise from Mendenhall in camp, have to be considered threats to put the ball in the air.

There’s also got to be some concern that the work during the week to prepare doesn’t limit Armstrong’s reps and thus his development as the starting QB.

“I love the innovation, but not at the expense of Brennan,” Mendenhall said. “There’s no threatening, or there’s no threat to his leadership. The team knows that. He knows that. We all know that, so that part is not really at risk. It’s really trying to have the right or … to maximize every player on our offense that can help us, have them help us. But you’re accurate in making sure that doesn’t become out of balance, and then affect Brennan, and the core of what we do.

“We’re aware of it, and working hard to dial it in as tight as we can,” Mendenhall said. “I would say it’s still a work in progress, of having the exact identity, just because we didn’t have Brennan for two weeks.

“But on Saturday, I liked the direction, and I thought that first drive we had was masterful, that was as close to how I kind of envision what’s possible. That was the best I’ve seen, but matching what I hoped it would look like, looks like going forward.”