What are the stages of lactation? 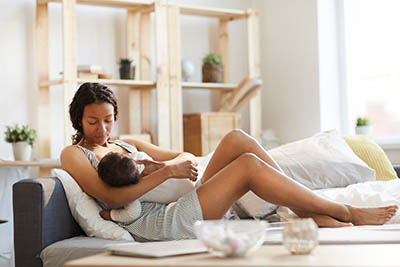 The physiological process of lactation starts way before the baby is born. The breasts must be adequately prepared to produce enough quality milk to feed the newborn. Lactation is a process with mutual benefits for both mother and child. It strengthens the bond between the two. But obviously, the baby gains a lot from breastfeeding. There is a thin line between breastfeeding and lactation. While breastfeeding is merely physical, lactation is more of a physiological process. It involves several organs, namely the breasts, the brain, glands, and several hormones.

Breast tissue starts undergoing rapid multiplication in the first trimester to support milk production. As a result, breasts change in size, shape, and composition. Milk ducts and glands develop in the second trimester. The mother may notice some leakages from the breasts at this point. All preparations are finalized during the third trimester.

The baby’s birth triggers hormonal changes that prepare the mother’s body for the first feeding. The hormone prolactin produced by the pituitary gland triggers glands in the breasts to produce milk. As the baby sucks, the motion triggers the production of the hormone oxytocin. It is this hormone that is responsible for the flow of milk.

Also known as ‘First Milk,’ this is the first feeding the baby receives. The milk at this stage is produced between the first and fifteenth day of delivery. Colostrum is mainly composed of proteins and other elements that strengthen the infant’s immune system. Some of the other components of colostrum include:

Colostrum becomes transitional milk approximately two weeks after birth. The milk is produced for another two weeks. Components are adjusted at this stage to suit the baby’s nutritional needs. But the milk is generally rich in fat and lactose.

The baby feeds on mature milk for the remainder of the period until the breastfeeding is stopped. Composition during this stage varies from foremilk to fat-rich milk, but it generally remains balanced. The milk has a lot of water for hydration. It all depends on the baby’s nutritional needs. It is important to note that the amount of milk and quality reduces gradually as the baby grows. The reason is that the baby can now feed on a variety of foods, including solid food. They are now able to

Why is lactation important?

Whether to breastfeed or not is solely a mother’s decision to make. However, every newborn must be breastfed with the first milk at least. Breast milk provides the baby with ideal nutrients critical for their development. The baby’s immune system is of particular importance in this regard. Unknown to many, immunity provided and stimulated by breast milk is far more superior than medically-induced immunity. The main anti-infective elements found in breast milk include lysozyme and lactoferrin.

Clinicians often educate mothers on the possibility of successful breastfeeding. What does not mean? It means not every mother can breastfeed even if they want to. Many factors determine whether mothers can breastfeed or not. The first factor is the obvious one; a mother can decide not to breastfeed their baby. Secondly, the mother’s health condition may prevent her from lactation. The most common medical reason for this is when the mother has an infectious disease that can easily pass to the baby. HIV/AIDS is one such condition that may prompt a mother not to breastfeed.