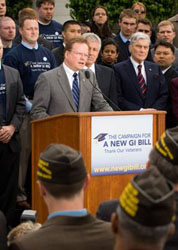 Sen. Jim Webb, D-Va. marked on Wednesday the one-year anniversary of the implementation of the Post-9/11 GI Bill, which has offered more than a quarter of a million veterans and their families the opportunity to attend college or training programs.

After introducing the bill on his first day in office, Sen. Webb successfully spearheaded the greatest expansion of veterans benefits in the past 25 years.

Signed into law on June 30, 2008 and implemented one year ago, the bill offers returning service members up to 36 months of benefits including payment of tuition, room and board, fees and educational costs plus a $1,000 a month stipend while enrolled in full-time training.

“The United States has never erred when it has made sustained new investments in higher education and job training – and its veterans,” said Webb. “I think we can all take pride in saying that we have been able to provide a proper investment in the future of those who, since 9/11, have given so much to this country.”

In the first year, more than 550,500 students have applied to receive their new benefits and more than 267,500 veterans are now attending classes on the Post-9/11 GI Bill.

“Today marks the one year anniversary of implementation of the Post-9/11 GI bill. I was privileged to introduce this landmark legislation on my first day in office. The idea was to provide those who have served since 9/11 the most comprehensive educational benefits since World War II. We did that.

“We began with a simple concept—if we continue to call these men and women the next “Greatest Generation,” then we should as a nation express our appreciation in a proper way by giving them the same educational benefits as those who served during World War II.

“We pay their tuition, buy their books, and given them a monthly stipend. It was a formula that worked magnificently for those who served in WWII, and 7.8 million of those veterans—because of the GI Bill—were able to have a first-class future.

“We worked very hard in my office, at every level, pushing this legislation. We eventually received the key cosponsorship of three initial senators: Senator John Warner of Virginia, my former senior senator; Senator Chuck Hagel of Nebraska; and Senator Frank Lautenberg of New Jersey. We approached this in a way that employed balance. We had two WWII veterans, two Vietnam veterans, two Republicans, two Democrats. We wanted to strip all the politics out of this issue.

“Along with my Democratic and Republican colleagues in Congress, leading veterans’ service organizations, the higher education community, and, quite frankly, despite the continued opposition of the previous administration, which for some reason opposed this legislation all the way to the day before they signed it, we were able to get this bill passed.

“I take pride in saying that two years ago today, the Post-9/11 GI Bill was signed into law. And, one year to this day, the new GI Bill went into effect for those who have served our nation honorably during a time of war.

“As of today, I can report to this body that in this first year of implementation, more than 550,500 students have applied to receive their new benefits and more than 267,500 veterans are now attending classes on the Post-9/11 GI Bill. That’s over a quarter of a million young men and women who otherwise might not have had the opportunity for a truly first class future.

“As one who grew up in the military, was privileged to serve, and who remains proud of the service of my son who served as a Marine and my son-in-law who have served as a Marine in Iraq and Afghanistan, and so many other friends, I understand what it means to be proper stewards for those who have given this type of service. For those of us in Washington, that is our duty.

“This GI Bill, I think, shows a sense of responsibility and the desire of the leadership of this country to see those who serve really be able to move forward in their lives after their service and continue to provide great contributions to our country.

“But, this GI Bill represents more than just honoring and rewarding those who served.

“When I ran for office, I spoke of the need to reclaim a measure of economic fairness in this country. Particularly in such dire economic times, the health of our country and society is measured by how the working people are able to make it through the different barriers—and achieve great things alongside those people who have had greater advantages. And, this bill does that today.

“Today, we are supporting hundreds of thousands of our veterans with a college education. But, our reward is going to be 20 years from now when we can look around and see the successes that have been able to happen to people who are serving now because of this GI Bill.

“The United States has never erred when it has made sustained new investments in higher education and job training – and its veterans. Educated veterans not only have an easier transition and readjustment experience, but they boast higher income levels, which in the long run increases tax revenues.

“Our country has benefited greatly from its tradition of offering educational assistance to returning veterans. We should remember what the GI Bill did for those who served in World War II. Very few serrvicemembers thought they would be able to have a college education once they went to the military during those dark and troubled times. The World War II GI Bill, much like the Post-9/11 GI Bill today, was an investment in our economy: for every dollar invested in the GI Bill for WWII veterans, seven dollars were generated. This is what we’re doing now.

“This is not simply an advantage for this country, it’s an obligation that we have.

“So, on this day, I would like to remember the contributions of those who came together to help us pass this legislation. I would like thank the American Legion, the Veterans of Foreign Wars, the Iraq and Afghanistan Veterans of America, the Military Officers Association of America (MOAA), the American Council on Education, and the National Association of Independent Colleges and Universities, among many others—and the nearly 60 U.S. Senators and over 300 U.S. Representatives signed on as cosponsors to this landmark effort to reward our veterans for their honorable service.

“I think we can all take pride in saying that we have been able to provide a proper investment in the future of those who, since 9/11, have given so much to this country.”