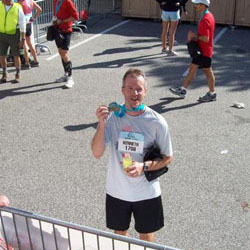 Ken Slack was pushed to try something wild – trying his hand, or rather his feet, at running a marathon. The Waynesboro Y was a base of training operations for the veteran TV newsman on his quest.

“Doing runs during the week, the Y was my home base. I’d squeeze in a morning run, hit the showers, go to the pool and head out to work,” said Slack, the Shenandoah Valley bureau chief for NBC29 News, who began training in July for the 2010 Outer Banks Marathon.

“If I can shave off the 18 minutes and get under four hours, that would be cool,” Slack said.

Read more about the Waynesboro Y at WaynesboroYMCA.com.

His first distance run came in the 2009 Park-to-Park Half-Marathon that takes runners on a 13.1-mile path from Ridgeview Park in Waynesboro to the Stuarts Draft Park in Augusta County. He signed up for that run at the urging of Waynesboro parks superintendent Dwayne Jones.

“The first time I ran one mile, i thought I was going to keel over,” Slack said of his early training. But he got to the point where he started enjoying it, “which kind of surprised me,” Slack said.

It was after the 2010 Park-to-Park that Jones prodded Slack into trying a full marathon. It took a couple of months for Slack to finally pull the trigger on making a go at 26.2 miles. He put himself on a 16-week training plan that he began in the heat of the summer in July.

The Waynesboro Y played an important role for Slack given his timing.

“Some of the short runs, I would do a run and come in and do a workout and then go into the pool and do several laps so that I was still getting some exercise but wasn’t killing myself out there on 90-degree days,” Slack said.

“The Y was a great resource along the way,” Slack said.