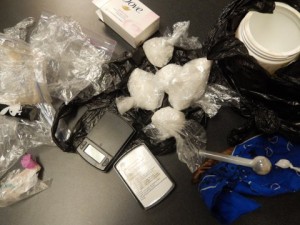 The Waynesboro Police Department has arrested an Augusta County man on felony drug distribution charge after a routine traffic stop resulted in one of the biggest methamphetamine seizures in recent history.

Luis Alberto Rivera Garcia, 21, faces possession of methamphetamine with the intent to distribute and other traffic related charges.  On Tuesday at approximately 10 p.m., officers stopped the 2005 Chevrolet Equinox that Garcia was driving near the intersection of East Main Street and North Delphine Avenue. When he could not produce any a driver’s license or any identification, he was taken into custody.

When officers searched him and the vehicle, they found over 100 grams of methamphetamine, paraphernalia used for drug distribution and $1,100 in cash.

The vehicle Garcia was driving is registered to Gustavo Cruz, who was arrested earlier in the year and has ties to the Sureno 13 street gang.

The police department is still investigating the link between the two men.

Garcia is being held without bond at Middle River Regional Jail.