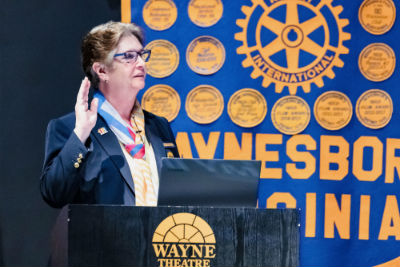 A Waynesboro Noon Rotary Club member has been chosen to lead District 7570 as District Governor for the 2020-2021 Rotary year.

Nancy Whitlock was installed at the Historical Wayne Theatre via a live-stream broadcast with a “socially distanced” live audience on June 29.

District 7570 includes 81 clubs representing over 3,200 members in an area that encompasses the western half of the state plus portions of northeastern Tennessee. The district is part of Rotary International, which has 1.2 million members worldwide with 35,000 clubs in over 200 countries.

Rotary, started in Chicago in 1905, is the oldest and largest service organization in the world.

Whitlock has been a registered nurse for over 40 years: working in hospitals, teaching nursing and coordinating community health care. She was the president and owner of PRN Staffing for 12 years before she became clinic coordinator at Augusta Regional Free Clinic.

As district governor, clubs will look to her for leadership, support, and motivation as they carry out service projects and participate in Rotary programs across the entire district.

Fifteen area governors and four district officers were also installed at the event. Ruth Arnold of the Staunton Rotary Club will serve her third year as area governor for Area 4 that includes five local clubs in Staunton, Waynesboro and Nelson County.