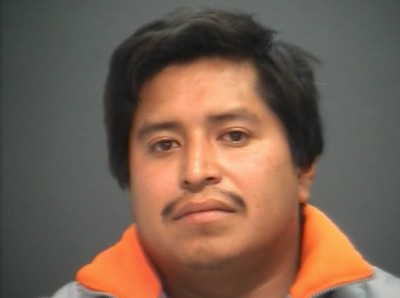 The Waynesboro Police Department is searching for a wanted drug dealer after serving a search warrant Wednesday night at his residence.  The search yielded one of the biggest methamphetamine seizures in Police Department history.

Roberto Castillo Escobar, 34 years old, is wanted on one count of Distribution of Methamphetamine. On Wednesday at approximately 11:30 p.m., members of the Department’s Special Operations Division served a search warrant at 300 South Winchester Avenue to look for narcotics. The search warrant was a follow up to an earlier arrest city police made.

At the time of the search, no one was home but officers recovered over six ounces of crystal methamphetamine at the scene. The drugs, which were hidden among the refuse in the bottom of a full trash can, have a street value of approximately $11,000.  Currently, police believe that Escobar is on the run because he failed to show up at his job at a lumber yard in Crozet, Virginia Thursday morning.

On Thursday afternoon, the Department’s Animal Control Officer seized Escobar’s Border collie mix as an abandoned domestic pet.  It is being cared for at the Shenandoah Valley Animal Services Center.

Anyone with information on the whereabouts of Escobar is asked to call the Waynesboro Police Department at (540) 942-6675 or Central Shenandoah Crime Stoppers at 1(800) 322-2017.  Information given to Crime Stoppers may be given anonymously.  Callers with information that lead to an arrest in this case are eligible for a cash reward of up to $1000.