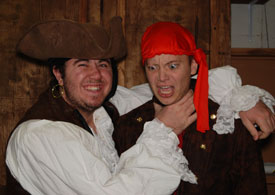 Did you know that pirates believed that wearing pierced earrings would improve their eyesight and that whistling on a ship would cause the weather to turn stormy? Learn more about modern-day pirates Feb. 23–26 at Waynesboro Players’ premiere production of local author Matthew Warner’s Pirate Appreciation Day.

In this comedy, a Waynesboro Players directorial debut for Caleb Towns, a group of buccaneers believes that hijacking a cruise ship on the Talk Like a Pirate Day holiday is the proper route to infamy. They discover more than they bargained for in a colorful ensemble of fellow passengers. By the time night falls of the first day at sea, a tentacled monster will be summoned, a sword fight will be fought with plastic butter knives, and someone will take a one-way voyage to Davy Jones’ locker!

Playwright Warner gives the show a shining sendoff by thanking the “cast and crew for throwing caution (and dignity) to the wind, and for making me laugh to the point of illness.”

Tickets will be available online at www.waynesboroplayers.org, at the door and at various locations in Waynesboro, Fishersville, Stuarts Draft, Verona, and Staunton (a list can be found online).