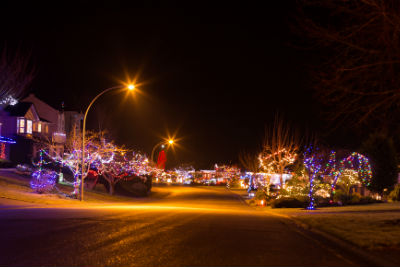 WAYNESBORO — Blame it on COVID-19, and not the Grinch.

After the city of Waynesboro decided on a reverse parade instead of its traditional annual Christmas parade down Wayne Avenue and Main Street the first Saturday in December, the pandemic struck the Christmas season another blow and the reverse parade was also cancelled.

“Basically, it was because of the restrictions and guidelines of COVID,” said Susan Roberts, superintendent of recreation for Waynesboro’s Parks & Recreation Department, of the plans for a reverse parade.

The reverse parade would have been part of the city’s “That Holiday Feeling” Decorations Trail, which invites businesses and homes this year to register their decorated home on the department’s web site and encourage visitors to drive by and enjoy their exterior lights and decorations.

“So, we just had to cancel a section of it — the parade,” Roberts said.

The tour of houses begins Friday, Dec. 4 and ends Sunday, Dec. 20. From 6 to 8 p.m. each evening, visitors are invited to drive through the River City guided by a Google map or the list of addresses of local homes decked out for the holiday season.

Roberts said that 50 homes and businesses have registered for the event.

“That way anyone who wants to go out and look at lights can do so,” Roberts said.

Visitors will be able to enjoy the lights and decorations safely from “toasty warm cars.”

“We’re excited to try something a little different,” Roberts said.

Before the pandemic, Roberts said Waynesboro Schools usually handled letters to Santa and ensured they made it to the North Pole on time.

This year, the United States Postal Service will handle letters to Santa directly.

“They will just make sure that Santa gets the letters,” Roberts said.

No postage is required on letters to Santa, according to Roberts, but a legible return address is necessary for Santa to write back to each letter writer.

Roberts said that letters to Santa is another tradition in the city that will continue this year, although differently.

Roberts, who has handled planning the Christmas parade for four years, is already anxious for next December.

“We just hope that next year we’ll be able to have one heck of a celebration,” Roberts said.

Jim Shaw, Waynesboro’s deputy city manager, said the city had hoped to have a reverse parade on Dec. 5, and have residents and visitors drive through demonstrations.

“So, the reverse parade is not going to happen either,” Shaw said.

The governor’s recent executive order limiting gatherings to 25 changed the city’s Christmas plans as of the week of Thanksgiving.

“I think we’re encouraging people to be safe,” Shaw said.