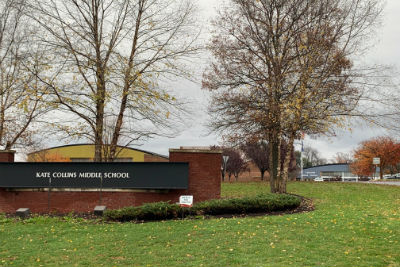 WAYNESBORO — A piece of the woman for whom Kate Collins Middle School was named was donated to the school in October.

“In memory of Miss Kate,” Nester said of the donation of two bookends. “Of course, I was thrilled to have that bit of history brought to us.”

For now, the bookends are in Nester’s office while she and staff discuss where they should be permanently displayed in the school.

Nester said that Shields, a librarian, suggested the school’s library, but it is on the lower level of the school.

“We thought it would be kind of nice to have them up here [on the first floor],” Nester said.

The bookends could be displayed in the school’s main office or in a display case near the auditorium.

“The bookends were a retirement gift to her,” Nester said.

Cast in bronze by Virginia Metalcrafters in Waynesboro, Nester said one of the bookends is engraved with Collins’ years of service, 1913-1963.

“It was nice for Mr. Shields to reach out to us,” Nester said.

To John Shields, 56, of Colonial Heights, Collins was Aunt Kate, a sister of his father’s mother.

The youngest of six children, Shields said that when his mother died in 2005, his older sister Melinda inherited the bookends.

Melinda died early this year. Shields said that he and his brother decided together to donate the bookends, which the family always believed were a retirement gift from Waynesboro Schools, to the school on Ivy Road.

“I thought it just nice they go back to the school named in honor of her,” Shields said.

On Oct. 19, Shields and his wife, Virginia, traveled to Waynesboro and presented the bookends to the school.

“It was really wonderful. We really enjoyed it,” Shields said.

During his visit, Shields said he “actually learned a lot more about my great aunt.”

Shields’ earliest memories of his Aunt Kate are of her after she retired.

“Growing up, I did remember visiting Aunt Kate in a nursing home in Lexington,” Shields, who grew up in Rockbridge County, said.

Collins never married or had children.

“She evidently was so involved in school, and different activities involved in the community,” Shields said.

Shields said “the best memories I have” are of items in Collins’ home that she and her sister, Liz, collected during their retirements years when they traveled the world.

“They just seemed to have the most wonderful things,” Shields said.

Collins died when Shields was in college.

He said he assumes his Aunt Kate would approve of the bookends returning to the school named after her.

“I hope she lived a rich, full life,” Shields said.