Waynesboro history uncovered in renovation of building on North Avenue 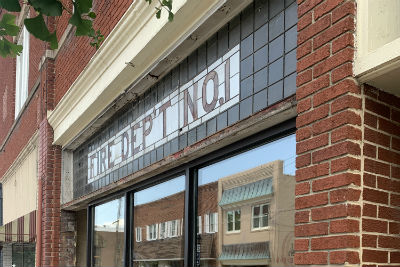 WAYNESBORO — Being No. 1 is good in many circumstances in life, and when you are the site of the first Waynesboro Fire Department you definitely stand out.

As renovation of the nearly 100-year-old brick building at 143 North Wayne Avenue started a year ago to create co-working space downtown, a stained-glass window 3 feet tall and 16 feet long was found.

The window said: Fire Department No. 1.

“It was just a huge find, I think, being that it’s still intact,” said Nick Salzman, who has lived in Waynesboro for 15 years.

The window was found after plaster was pulled down from a wall.

However, “we couldn’t confirm anything,” Salzman said of the building’s history.

Until he saw a photo at the Applebee’s in Waynesboro: a photo of the brick building as a fire department.

“I took it as a blessing. We have an opportunity to intervene in history,” Salzman, who grew up in Charlottesville, said.

Raising funds would save a piece of Waynesboro history, preserve it for future generations, “and instill a sense of pride.”

Salzman said the hope is to raise $15,000 to restore the stained-glass window. The community so far has donated $835.

“It’s really cool to find this [window],” he said, but funds are needed to preserve it.

Restoration plans include incapsulating the front of the window with glass and restoring the stained glass, which requires extraction of each section from the building and soldering them back into place.

A GoFundMe page is available at gf.me/u/y69qxu.

Salzman said once restored, the window would be displayed in the front of the building.

Before he knew about the building’s history, Salzman, who was a junior volunteer firefighter as a teenager, already had plans that for every three paid memberships at 143’s coworking space, one day would be donated to a local teacher or first responder.

“I thought it was kind of fitting,” Salzman said when he learned of the building’s history.

Salzman, a disabled veteran who served more than four years in the U.S. Army, said the original fire department at 143 North Avenue was made of wood and built in the 1850s. After it burned down, the brick building was built on the site.

“I think it would be a great way to give back to the community,” Salzman said of making professional space available on the site.

He hopes the space is renovated and able to open in late January.

With today’s current political turmoil and the COVID-19 pandemic creating situations beyond human control, Salzman said that restoring a window from Waynesboro’s first fire department is “an opportunity to intervene.”

“I think we can all agree that history needs to be preserved,” Salzman said.

For information about the coworking space, go to 143cowork.com.