Wayne Taulapapa ready to step up, lead in UVA backfield 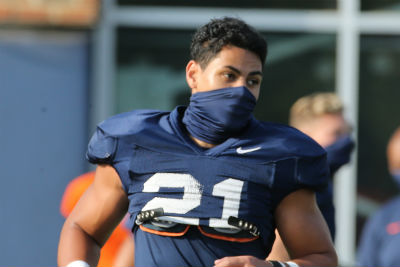 Wayne Taulapapa isn’t exactly a grizzled veteran. The junior tailback looks like he shaves maybe once a week. But through attrition, he’s the wise old guy in the running back room at UVA.

“I definitely feel that Coach has put a lot on me to help the new players that have come in. With the absence of Jamari, Lamont and PK, guys that I looked up to as veterans and people that taught me, I take it upon myself to not only help my guys with the plays, but also to teach them, instruct them. Just been trying to help Coach Atuaia as best as I can,” said Taulapapa, who gained 473 yards on the ground and scored 12 touchdowns as a sophomore in 2019.

With Jamari Peacock, Lamont Atkins and PK Kier in the transfer portal, and Mike Hollins opting out, the backfield is thin in terms of experience – down to Taulapapa and Towson grad transfer Shane Simpson, who is coming off a season-ending knee injury that cut short what would have been his redshirt senior season in 2019.

The thinness roster-wise comes as coach Bronco Mendenhall and offensive coordinator Robert Anae are looking to get more production from the running game with the flux at quarterback.

On Thursday, Mendenhall named redshirt sophomore Brennan Armstrong as his starting quarterback for the Sept. 19 season opener at Virginia Tech.

It will be the first career start for Armstrong, who was record-setting QB Bryce Perkins’ backup in 2018 and 2019.

Perkins was actually Virginia’s leading rusher in 2019, gaining 769 yards and scoring 11 touchdowns on the ground, after a 2018 that had him gaining 923 yards with nine rushing touchdowns as the linchpin of Anae’s read-option attack.

The lack of experience at QB and lack of depth at running back is tempered a bit by the abundance of experience and depth on the offensive line, which returns all five starts on a unit that has the most returning career starts of any O line in the ACC.

As long as Taulapapa and Simpson can stay healthy, then, they should get plenty of opportunities to showcase their talents.

Taulapapa, now an upperclassman, spent the offseason honing his craft, studying game tape to try to get a better feel for how things are supposed to work.

“I think every part of my game is improved. And you know, we’re still going, there’s a lot of time left until the season, and so every day is just a continuous movement to improve on both on all running, catching and blocking.”