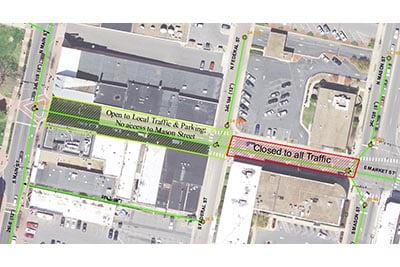 Harrisonburg Public Utilities will begin work next week to relocate a waterline and replace a manhole along East Market Street in the downtown area, causing a stretch of roadway to temporarily close.

Crews will begin efforts on East Market Street between Federal and Mason streets on Friday, August 5, closing the roadway to thru traffic.

Drivers will still be able to travel eastbound on East Market Street from Main Street to Federal Street, where they can turn north toward Elizabeth Street or south toward Water Street.

An additional closure, on South Federal Street from East Market Street to the alleyway before East Water Street, will be in place toward the end of the project.

The project seeks to rebuild a manhole originally created in 1870 and relocate a waterline to a more secure location.

Additionally, crews will seek to repair a sewer line that is allowing groundwater into the system, thus addressing the City’s infiltration and inflow reduction goals.

Businesses along this stretch of East Market Street will remain open and be accessible while the project takes. Some properties on East Market Street between Mason and Community streets may experience a temporary water service outage during this project, and city staff will work to alert area properties in that case.

City staff anticipates the project will end on August 19, weather-permitting.