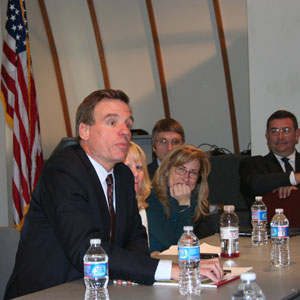 It can be like trying to herd cats to get localities to cooperate in the Shenandoah Valley on a strategy to promote the tourist sector.

For one, what is the Shenandoah Valley?

“How do you define the Shenandoah Valley?” U.S. Sen. Mark Warner asked the roughly 30 attendees at a Shenandoah Valley Regional Tourism Roundtable that he convened at the Frontier Culture Museum in Staunton on Monday.

The discussion that ensued – encompassing political, geological and cultural definitions – demonstrated the difficulty in trying to get people in the Valley tourist sector to come together on a plan of action.

Warner told reporters after the summit that he called together tourism-industry leaders to try to jumpstart the kind of effort that he did with success in Southwest Virginia during his term as governor.

“I’d seen some of the stuff take a little more root in Southwest Virginia,” Warner said. “I just feel like there are such assets here in the Shenandoah Valley, and I think about this as a consumer and as a promoter that it’s still – as much as they’ve got, it could be better. It could be presented better.”

Warner asked participants if it wouldn’t make more sense for localities and travel-industry associations to coordinate their web and print marketing efforts. The feedback: We could, but we could use some help getting there.

“When I was governor, I’d come to an event like this with a check in hand,” Warner joked in response, alluding to the tight fiscal environment in Washington.

A goal for Warner with the summit was to get people in the tourist industry talking – and thinking.