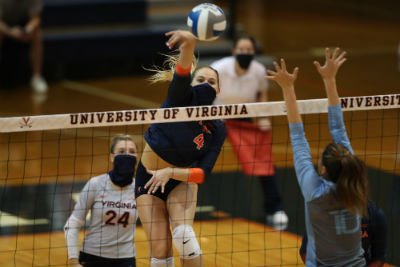 The UVA volleyball team begins ACC play this weekend with a pair of matchups against Duke.

The ‘Hoos will host the Blue Devils on Friday and Saturday in matches beginning at 6:30 p.m. both evenings.

Both matches will air on ACCNX. Links to the broadcasts and live stats are available on VirginiaSports.com.

UVA has been idle since a season-opening three-set win over The Citadel on Sept. 19.

Freshman libero Madison Morey earned ACC Freshman of the Week honors for her 20-dig performance in the sweep.

Her 20 digs were the most by a freshman since 2010 when Emily Rottman eclipsed the mark in a four-set match.

Veteran Sarah Billiard led Virginia with nine kills in the sweep of The Citadel.

Billiard had produced 10 kills against Duke in a three-set loss last season and has 19 kills in her past two matches against the Blue Devils.

Virginia last defeated Duke in a four-set win back in 2015.