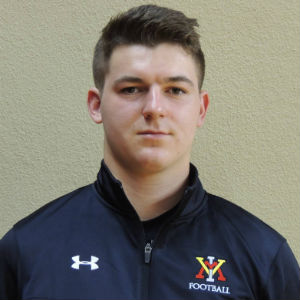 VMI quarterback Reece Udinski was named the Southern Conference Offensive Player of the Week for Week 4 of the 2018 season.

His 491 yards through the air were good for seventh in a game in SoCon history, while he added four touchdown passes on the day.

Udinski led VMI on two scoring drives of more than 60 yards after the Catamounts – who entered the contest receiving votes in both major national polls – took a 15-point lead with 6:19 left in the game.

The weekly award also marks the first time a VMI offensive player has achieved the honor since wide receiver Aaron Sanders accomplished the feat on October 26, 2015.

The Keydets take on SoCon foe Mercer Saturday at 1:30 p.m. at Foster Stadium for the second home game of the season.