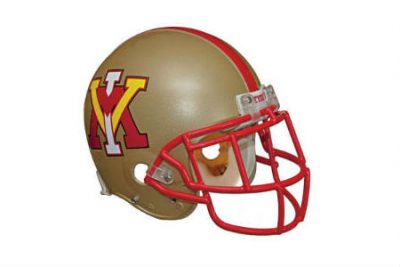 VMI Football continued its preparation for the 2019 season opener by using the Thursday morning practice session as a “mock game” format with the entire game day ritual conducted with pre-game warm-ups, a halftime locker room period, and situational scrimmage scenarios all run in thud tempo setting. All aspects of the kicking game and special teams got extended work as well.

“The mock game is designed to get us ready for the first game with every little detail as far as pregame warm-up, going into the locker room, coming out and playing, halftime, working on substitutions, offense, defense and special teams coming on and off the field and working on the timing of all that. We had the play clock – all the fine points that you don’t have in a regular practice. We went over 80 snaps today and it was hot and humid and I like the conditioning of the team. We took another step forward today as we begin the 2019 season.”

“I think we’ve done a lot of good. We found out a lot about our freshman class and we put in all of our offense, defense, and special teams play. We got that all in within 18 practices which I’m happy with. We actually had out mock game two days earlier this year so we’re a little bit ahead of where we’ve been in the past. I like where our team is – we’ve got a lot of returning experience on this football team.  A couple of guys are banged up, but nothing season ending, so hopefully we’ll get them back healthy and Friday we’ll start the prep on Marshall.”

Where the most improvement has been in preseason camp

“I think our kicking game is much improved. Reed King, Grant Clemons, Robert Soderholm, and Connor Riddle really worked on their trade in the offseason, and they’ve been very sharp. I’ve been impressed with that. And it’s been a lift because we generally start practice with one of the special teams units and the biggest improvement has come with that. I’ve got to give credit to Nick Conte our specialists coach who is doing a good job of helping those guys on being consistent. They’ve been consistent day in and day out. It’s really been pleasing to see.”

On finalizing a two-deep

“We’re going to watch the film and by Friday morning we’ll have a two-deep finalized for our team. We won’t make it public until we have to for the Marshall game. Most of it is pretty much known.”

“We’re excited about playing Marshall especially four hours from here so it’s a short bus trip. Doc Holliday is a tremendous football coach and tremendous recruiter. He was a great host on a couple of our past road trips that way and he allowed us to have walk-throughs at Marshall. He really has a great football team picked to finish no. 1 in Conference USA and  picked to be a top 25 team. They are excellent in all phases and have a really big offensive line with four starters back plus a transfer from Florida State, Josh Ball (Fredericksburg, Va.)  who I recruited out of high school. A freshman Conference USA quarterback of the year is coming back to lead the offense. Defense, they have a little bit of attrition which six starters back, but the guys they have coming back are really talented and their special teams are legit and they give you a lot of looks and come after punts, block punts and return for touchdowns. Really a top-notch football team and a great challenge and out kids are fired to go out there and go at it against the very best in the country.”