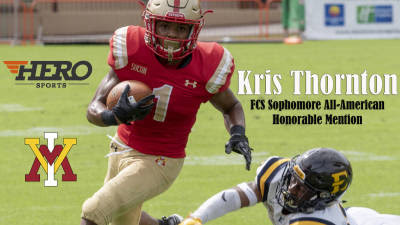 The Manassas, Virginia native led the VMI receiving corps with over 1,000 reception yards (1,003) in 2018 and scored four touchdowns as quarterback Reece Udinski’s primary target throughout the year. He earned a career-high 155 receiving yards against Mercer on Sept. 29 by recording 11 catches including a long of 32 yards.

He tied his season high with 11 receptions against The Citadel on October 20 as he tallied 146 yards and two touchdowns against the Bulldogs. During the game he earned his second best reception of the year with a 65-yard catch. He would later break that personal mark with a 67-yard reception against Old Dominion in the season finale.

Other highlights from the year include claiming 119 receiving yards against ETSU on Sept. 14 and later a 116-yard effort at Chattanooga on October 17. He totaled 87 receptions for the season.