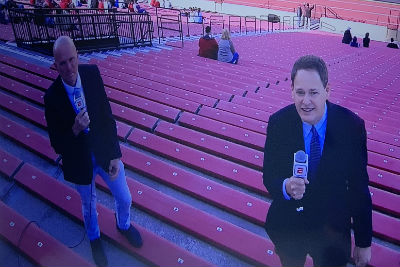 Chris Graham (left) and Wade Branner were on the call for the VMI football scrimmage on ESPN+.

I finally was allowed in a stadium for a college football game in 2020! Which shouldn’t be the lede to my coverage of the VMI spring game, er, fall game, held Saturday at Foster Stadium in Lexington, but considering.

The White Team held on for a 21-20 overtime win over the Red Team in the game, clinching the win after snuffing out a two-point conversion pass from quarterback Seth Morgan.

Morgan, a redshirt freshman from Pittsburgh, had a fine day – 10-of-13 passing, 90 yards, two TDs through the air, adding 24 yards on the ground.

Chance Newman, a redshirt sophomore from Daphne, Ala., was 8-of-12 passing for 70 yards and two TDs and added 45 yards on the ground.

Freshman wideout Travis Buchanon had five catches for 75 yards and a touchdown in overtime that proved to be the game-winning score.

You can watch it all on-demand on ESPN+. You’ll hear the Voice of the Keydets, Wade Branner, on play-by-play, with me on color commentary.

It was a Saturday in November, and it was VMI vs. VMI.

That said, for the kids, it was their first live tackling in 2020.

VMI, like a number of programs, didn’t get a spring practice before COVID-19 shut the world down, and then like much of FCS, the Keydets decided to push the live football season from fall to spring, with the opener now scheduled for Feb. 20 at Chattanooga.

That meant fall practice, akin to what you see in the spring, culminating in a spring game that the athletics department decided to broadcast for myriad reasons, none of them being to give me something to do, and to get me in a football stadium in 2020, but even so, I’m eternally grateful.

As is my wife, who is happy to get me out of the house.

Now our attention turns to the spring, as VMI football looks to build on a five-win season in 2019, with an eye on sneaking up on the SoCon in 2021.

“I was very pleased it came down to a two-point conversion to win the game, because I think in order to compete for the Southern Conference championship, those are the way games are going to come down,” coach Scott Wachenheim said.

It was a tough sled getting through the 15-practice fall period, but Wachenheim feels good with how his team progressed – and how the hard work was able to come to a nice end point on Saturday.

“A lot of good tape for us to go out and evaluate, and see how guys play in the stadium and see how they play when we are actually tackling,” Wachenheim said. “I actually think our quarterbacks needed to get tackled today, because I think it was eye-opening for them early when they thought they could hang out there all day in the pocket, and they realized they couldn’t.”

The focus now: “Our guys need to finish the semester strong and make plans to stay in shape and come back in the best shape of their lives with great grades recorded in the fall and ready to attack the spring SoCon championship.”

I’m going to need to stay in shape, too.

My next game is also three months down the road.

Hey, it felt good to be welcomed, and wanted.