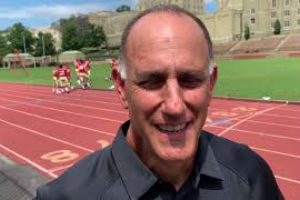 VMI has agreed to a three-year extension with football coach Scott Wachenheim, on the heels of the Keydets’ best season in 16 years.

“We are delighted that Coach Wachenheim will continue to lead our football program,” VMI Superintendent General Binford Peay III said. “He upholds the educational mission of the Institute and conducts the program according to its high standards while adhering to winning the VMI way. He and his family are deeply involved and supportive of the Corps of Cadets. We look forward to his leadership in the coming seasons.”

VMI finished with a 5-7 record in 2019, the most wins for a Keydets team since 2003, and the team was 4-4 in SoCon play, notching the first four-win campaign in conference play since all the way back in 1979.

VMI also reclaimed the Silver Shako trophy for the first time in 13 meetings after an October win over The Citadel in the Military Classic of the South.

Wachenheim was voted 2019 Southern Conference Coach of the Year by the league coaches and became the first VMI coach to achieve the honor since Cal McCombs in 2002. He was also named one of 15 finalists to the STATS FCS 33rd annual Eddie Robinson Award which honors the FCS Coach of the Year.

The 2019 squad established a new VMI school single season mark with for total offense (4,887)  and  passing yards (3,429) and the 370 points scored was the second highest in Institute history.

“We’re clearly pleased with the advancement of the football program and look forward to continued progress,” VMI Athletics Director Dr. Dave Diles. “Scott and Karla are deeply invested in VMI, and that is welcomed, appreciated and certainly helpful as we collectively build toward the future.”

During the Wachenheim tenure, 13 first team all-conference honors have been awarded to cadet-athletes and 10 have been earned player of the week distinction. In 2018, VMI football received a Division I FCS award for having the most improved Academic Progress Rate (APR) score in the Southern Conference.

“Karla and I feel extremely blessed to be able to continue as a part of the VMI family,” Wachenheim said. “Last season was truly exciting and indicative of what VMI’s future holds. The best is yet to come.”