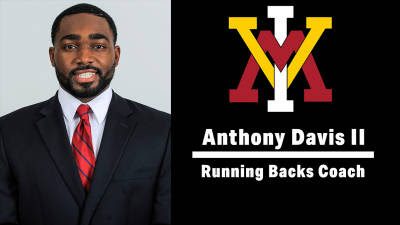 Davis recently served as an offensive assistant at Utah State University and worked with the Aggies wide receivers.

Previously, Davis spent two seasons at Western Kentucky first serving on the strength and conditioning staff before working as a graduate assistant coach after lettering for the Hilltoppers in the 2015 season. He first assisted with the WKU wide receivers in 2016 during a season that produced the school’s first-ever pair of 1,000 yard receivers in program history (Taywan Taylor and Nicholas Norris) as WKU captured its second straight Conference USA championship and a third straight bowl game appearance. Davis moved to the defensive side of the ball in 2017 where he worked with the WKU defensive backs and the nickelback position group. His top pupil that season was Ta’Corian Darden, a former walk-on who tallied 71 total tackles on the year which was fourth among all defenders and his 6.5 tackles for loss led all defensive backs and his six pass breakups were second most on the team.

Davis lettered two years collegiately at Indiana in 2013 and 2014 before playing the 2015 season as a graduate transfer at Western Kentucky.

A native of Indianapolis, Davis was a prep star at Warren Central and rushed for 1,127 yards and 11 touchdowns over a six-game span.

Davis holds a Bachelor of Science in Public Affairs from Indiana and a Master of Arts in Organizational Leadership and a Master of Business Administration from Western Kentucky.

“I was very impressed Anthony Davis throughout the interview process,” said Wachenheim. “Anthony’s experiences as a Power 5 running back and his time in an Air Raid style of offense will have tremendous carry over as he teaches our running backs the fundamentals of the position. Additionally, his experiences as a graduate assistant on the defensive side of the football will give us an added perspective when breaking down and game planning our opponents.”