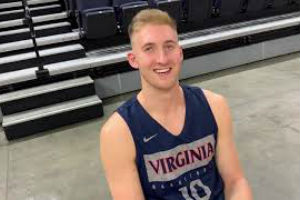 Virginia senior forward Sam Hauser is among the 50 players named to the watch list for the 2021 Jersey Mike’s Naismith Trophy for Men’s Player of the Year.

Hauser, a preseason first-team All-ACC selection, sat out last season after transferring from Marquette, where he was a second-team All-Big East selection in 2018-2019.

As a junior at Marquette that season, Hauser averaged 14.9 points and 7.2 rebounds per game, shooting 45.9 percent from the field, 40.2 percent from three-point range and leading the Big East in free throw percentage at 92.4 percent.

A list of the midseason 30 team will be released in early February, followed by the 10 national semifinalists and four finalists on March 4, and March 16, respectively.

The 2021 Jersey Mike’s Naismith Trophy will be awarded during the Final Four at the Naismith Awards Brunch on April 4, 2021.