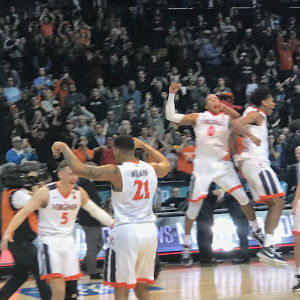 An 11-3 run broke open a close game, and top-ranked Virginia closed out North Carolina by hitting on 10-of-12 free throws in the final 1:57, in winning the program’s third ACC Tournament title, 71-63, Saturday in Brooklyn.

After the ‘Hoos went up by nine with 15 minutes left on an Isaiah Wilkins dunk, Carolina would get the deficit back to three on a Joel Berry II jumper with 8:17 left.

Back-to-back jumpers by Kyle Guy made it 56-49 with 6:50 to go, and North Carolina went scoreless for more than five minutes before a Luke Maye three made it 58-52 Virginia with 3:16 left.

Ty Jerome and Berry traded threes, but UNC was forced to foul to try to extend the game, and Virginia, which shot just 3-of-8 from the charity stripe in the semifinal win over Clemson on Friday, was deadly from the line Saturday, going 20-for-22 on the night.

Maye had 20 points for North Carolina, but had just five on 2-of-6 shooting after a hot first half.

North Carolina slipped to 100-46 in ACC Tournament play and remains tied with Duke for the most number of all-time tournament wins … UNC is 18-17 all-time in the ACC Tournament title game, 0-1 as a No. 6 seed.

Virginia is now 3-6 all-time in the ACC Tournament championship game.

The No. 1 seed is 32-15 all-time in ACC Tournament title games … This is the third time that the No. 1 seed has beaten the No. 6 seed to claim the championship.

Virginia is 8-2 all-time as the No. 1 seed in the ACC Tournament.

The Cavaliers are 8-1 all-time at Barclays Center.

With tonight’s win Virginia is 2-0 versus North Carolina in 2017-18 after winning the regular-season meeting Jan. 6 in Charlottesville by a 61-49 score.

With tonight’s win over the No. 12 Tar Heels, this year’s Virginia team has beaten five nationally ranked opponents.

The Cavaliers ended a seven-game postseason losing streak versus UNC.

Virginia limited its 32nd opponent of the season to less than 50 percent shooting (UNC shot 40.8 percent), shot 20-of-22 from the foul line and committed just four turnovers.

North Carolina junior Luke Maye led all scorers with 20 points … Maye scored 15 of those points in the first half, which ended with Virginia in front 34-30 … The double-figure scoring game was Maye’s 28th of the season.

With 17 points, UNC senior guard Joel Berry II hit double-figures for the 29th time this season and the 91st time in his career.

Kenny Williams reached double figures for the fourth time in the ACC Tournament and for the 25th time this season with 12 points … UNC is 21-4 this year in games in which the junior guard has scored 10-or-more points.

The 18,157 fans in attendance for Saturday night’s New York Life ACC Tournament championship game tied the record for attendance at college basketball event at Barclays Center, set 24 hours earlier in the tournament’s semifinal session … The ACC broke its own record set during the semifinals and finals of the 2017 tournament at the arena.