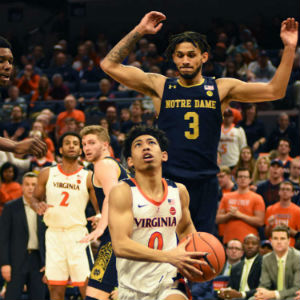 Kihei Clark drives to the rim. Clark had nine points for Virginia in the win over Notre Dame. Photo by Dan Grogan.

Braxton Key, after airballing his first free throw, hit back iron with the second, the ball bounding high into the air, then through the net.

That was with 2:04 left in the overtime.

And it would be the winning point.

How appropriate for the rock fight that was Virginia’s 50-49 win over Notre Dame.

The Cavaliers didn’t hit a basket from the floor in the OT, and the Irish had just one, a Prentiss Hubb 17-foot fadeaway with 3:31 to go.

“We battled and came up with a tough win,” ‘Hoos coach Tony Bennett said after the game. “Both teams have been playing well, and I think are trending in the right direction. Maybe we didn’t play as well tonight, but both teams have been winning and on a good trend, so that was two teams that had some momentum. Home court got us one.”

Notre Dame (15-9, 6-7 ACC) had won four straight coming in, and were averaging 76.2 points per game on the season, second-best in the conference.

They’d averaged an ACC-best 10.0 made threes per game, were shooting 35.7 percent from three, fourth-best in the league.

For 20 minutes, they were at least on pace from deep. The Irish shot 5-of-12 from long-range in the first half, but only led 26-22 at the break, because the UVA Pack-Line was stingy in the gaps, holding Notre Dame to 9-of-27 shooting overall.

Virginia (16-7, 8-5 ACC), coming off its best offensive effort of the season, albeit in defeat, an 80-73 loss at Louisville on Saturday, got five quick points from Tomas Woldetensae, who’d had 27 in the loss in the Yum! Center.

But the two makes in the opening four minutes from the junior would be it for the night for him, as Woldetensae would finish 2-of-9 from the field.

Mamadi Diakite, who’d had an inefficient 10 points on 3-of-11 shooting in the loss at Louisville, would carry the ‘Hoos Tuesday night.

Diakite put up 20 points on 7-of-15 shooting, taking advantage of Notre Dame coach Mike Brey’s decision to go one-on-one with the senior.

Still, it looked for the longest time that it was Notre Dame’s game to lose, until a 10-0 UVA run, fueled by an eight-point outburst from Jay Huff, put Virginia up 43-38 on a Huff three with 8:02 to go.

Nothing comes easy with this UVA team, though, as you knew already.

A Diakite driving layup at the 6:47 mark put the Cavaliers back up 45-40, but that would be it for the longest time, as Notre Dame held Virginia scoreless for the next six minutes, and took the lead on a T.J. Gibbs three that made it 47-45 Irish with 2:41 left.

A Diakite baby hook tied the game at 47, and the Virginia D forced a John Mooney miss on the final play of regulation, sending the game to the extra session.

A pair of Diakite free throws with 3:50 to go in the free-hoops period put Virginia on top, but the Hubb jumper, over the outstretched arms of Kihei Clark, tied the game up 19 seconds later.

Then Key, who had 13 rebounds on the night, rebounded from the awful airball on his first attempt on a two-shot foul to will the second shot through the net.

After another airball, from Clark, on a contested three with 20 seconds to go, Notre Dame had one last chance.

Brey called a timeout and ran a play that got the ball back to senior Rex Pflueger in the right corner, but the shot rimmed out with six seconds left.

Key, of course, the way this one wanted to play out, ended up with the rebound, and he flung the ball toward the UVA frontcourt, and Clark tracked it down as time expired.

Woldetensae had the five points on the bad shooting night, but also contributed five rebounds, three assists and solid defense in 41 minutes.

“I’m sick for our guys. We played our hearts out,” Brey said afterward. “Give credit to Virginia. Again, they are really hard to score against, and we had a couple possessions down the stretch where they just shut us down, and it is kind of hard to run your stuff.

“I’m disappointed for us, because I think we are playing pretty well, we played fearlessly and we put ourselves in position. But you have to tip the cap to Virginia, they made some big-time defensive plays,” Brey said.