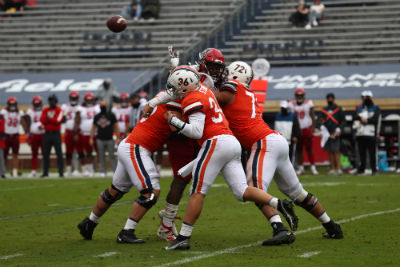 There was some optimism in the Virginia program even in defeat last week at top-ranked Clemson, which had to play deep into the fourth quarter in what turned into a 41-23 win.

Different feeling in the air this week after that ugly 38-21 loss to NC State that rather emphatically snapped UVA’s nine-game home winning streak.

“Today made it clear that we weren’t as far along as I anticipated,” coach Bronco Mendenhall said.

It was an uncharacteristic outing for a Mendenhall team, to say the least.

The Pack stopped the Virginia offense on two plays at the State 1 after an apparent Wayne Taulapapa TD run was reversed on replay.

The first punting situation was a harbinger of things to come. UVA needed a timeout 1:59 into the game because it only had 10 players in punt formation.

Cue in the seven penalties for 81 yards on Saturday.

There was the need to burn a second timeout on another punt in the first quarter because, yep, there were only 10 guys in the formation.

State got a TD pass on a trick play, another on a tip INT returned to the house by a 330-pound nose tackle.

There was a blocked punt, another that went for 19 yards.

A kickoff that sailed out of bounds, ceding field position.

And all the while, somehow, some way, the ‘Hoos were able to hang around.

After falling behind 24-0, and losing starting QB Brennan Armstrong on a helmet-to-helmet hit, backup Lindell Stone got UVA to 24-14 on a 1-yard TD pass to Tony Poljan with 1:08 to go in the third.

Then, following the picksix, Stone drove the Cavaliers 89 yards in 17 plays, culminating in a 5-yard TD pass to freshman wideout Lavel Davis Jr.

It felt all afternoon like, in spite of how poorly they were playing, something was going to happen to get them back in the game.

Stone, who was 30-of-54 passing for 240 yards and three TDs in relief of Armstrong, did a more than admirable job in his most extensive action by far in four seasons as a career backup.

“Once we scored, I think it was to (Poljan), I think we all felt like we were going to win the game, we’re going to get back into it,” Stone said. “The tip interception returned for the touchdown kind of put us into a more desperate situation. I feel like we had the big play. Our defense was coming up with a ton of stops. They were playing really well. The second half, especially, we just didn’t capitalize.”

The loss drops Virginia into unfamiliar territory – under .500 for the first time since the program’s 49-0 loss to Navy in the 2017 Military Bowl.

And now you have to wonder: is the 2020 team the one that played even for three and a half quarters with #1 Clemson, or the one that salvaged its season opener against woeful Duke with a big fourth quarter, and then laid the egg that was that loss at home to NC State?

“I think a big thing is learning from your mistakes and moving on,” said senior wideout Terrell Jana, who had nine catches for 111 yards in the defeat. “A lot of neutral thinking. You know, can’t go in there saying we did great, we did great, but you know, it didn’t happen for us. We can’t go on the negative thing, you know, we’re terrible. You have to be matter of fact. And the facts are, you know, we didn’t do what we needed to do.”

“It wasn’t an accident or a fluke. We didn’t prepare well enough to win,” Stone said. “We didn’t have the right mindset coming into the stadium this morning. I wasn’t prepared enough, and, you know, as a whole, as an entire team, that’s something that has to improve for us to turn it around on Saturday.”

That would be this coming Saturday, on the road at Wake Forest (1-2), which, gotta say it, played State a lot better than UVA did, rallying from an early 21-7 deficit to take the lead on a Kenneth Walker III TD run before eventually falling, 45-42.

Mendenhall, not one to mince words, addressed what needs to happen next head on.

“I’m not going to say, not going to jump to the conclusion, that they took it for granted, but we just didn’t prepare, compete or execute at a level well enough to maintain the outcome that we wanted. And that really was the answer,” Mendenhall said.