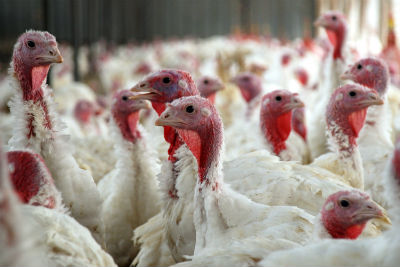 The National Agricultural Statistics Service reported that Virginia farmers were expected to raise 16.3 million turkeys in 2020, an increase from 16 million in 2019.

By contrast, the number of turkeys raised nationally is forecast to decrease to 222 million in 2020, dropping from last year’s 229 million.

“Virginia is the original turkey production state, and our farmers continue to be major producers in the U.S. despite shifting market trends,” said Tony Banks, senior assistant director of agriculture, development and innovation for Virginia Farm Bureau Federation. “Local consumers can count on Virginia-raised turkeys to be fresh and readily available throughout the year.”

According to the 2017 Census of Agriculture, turkeys are commercially raised on 448 Virginia farms, most of which are in the Shenandoah Valley and the northern Piedmont.

“There was a time when turkey was just a holiday treat at Thanksgiving, Christmas and Easter, and now the industry has developed such that people can enjoy nutritious turkey products in numerous ways,” he said. “We’re far beyond that time, though turkeys are still at the center of most Thanksgiving tables.”

Though many holiday celebrations are likely to be scaled down due to the COVID-19 pandemic, Bauhan noted local farmers have produced “a bounty” of turkey products to accommodate gatherings of any size.

“We’re still very excited about the Thanksgiving holiday that’s upcoming, knowing that most Americans are going to be enjoying the bounty that our industry produces,” he said.