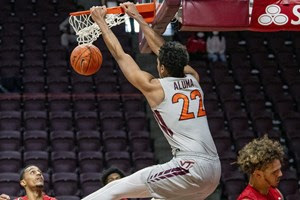 Virginia Tech redshirt junior Keve Aluma was named the ACC Player of the Week for the opening week of the 2020-2021 season.

Aluma averaged 18 points, five rebounds, 1.3 blocks and one assist per game last week, guiding the Hokies (3-0) to three victories and a ranked win. His 18 points and 1.3 blocks a game are team highs.

Aluma becomes the first Hokie to earn the ACC honor since Nickeil Alexander-Walker on Feb. 4, 2019.

Aluma led Tech to a season-opening win over Radford on Nov. 25 in his Hokie debut with a then-career-high 19 points on 7-of-10 shooting with three rebounds, two assists and two blocks.

He followed it up with setting his new career high in points against then-No. 3 Villanova (2-1) Nov. 28 on a neutral court, with totaling 23 on 9-of-14 shooting and pulled down eight rebounds and had two blocks for the second straight game.

In the ‘Nova game, he held preseason All-BIG EAST first-team selection Jeremiah Robinson-Earl, a forward who he guarded on the block all game, to a season-worst 5-of-15 shooting and season-low 14 points.

Robinson-Earl was coming off a 28-point performance the game before that earned him 2K Empire Classic MVP in the title game against No. 18 Arizona State.

Then to wrap up opening weekend, Aluma was steady versus USF (1-2) in the final game in Bubbleville for Tech on Sunday, Nov, 29, posting 12 points, four rebounds and a steal.

Tech will be back in action on Thursday versus VMI (1-1) at 8 p.m. ET at Carilion Clinic Court at Cassell Coliseum on ACC Network.