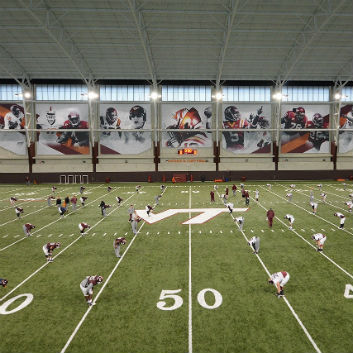 Virginia Tech has been recognized for the outstanding design of the university’s Indoor Practice Facility. The facility has been honored with three awards from the Design-Build Institute of America’s Mid-Atlantic Region, an organization that teaches and promotes the best practices in design-build.

The facility, built by W.M. Jordan Company – a company whose CEO is John Lawson, a 1975 graduate of Virginia Tech – cost $21.3 million and was finished in the summer of 2015. It possesses all of the features befitting a nationally ranked football program, while also being flexible enough to help certain Olympic sports. HKS Architects + Entertainment designed the facility.

The facility is one the largest of its kind in the nation at 92,000 square feet. It is 210 feet wide and 400 feet long, and has a synthetic turf that is fast, firm, and dense.

The height from the playing surface to the bottom of the steel ceiling trusses is more than 86 feet at its apex, thus allowing plenty of room for punting and kicking. Its 8-foot padded walls, wide sidelines, full scoreboard, and 40-second clocks on each end allow the football program to hold a full-contact scrimmage.

In addition, the facility features garage-type doors, which open quickly and allow the players to move rapidly from the outdoor practice field into the indoor facility in the event of inclement weather.

The facility also features a video platform that runs the entire length of the field. Three doors at separate locations lead out to observation decks to allow the video staff to film the portions of practice being held outdoors. The head coach also has his own observation deck in the facility, with a door that leads to a deck outside for the observation of the outdoor portion of a practice.

Other sports, such as men’s and women’s soccer, softball, baseball, and lacrosse also use the building for training and conditioning.

The exterior of the building possesses maroon trim and Hokie Stone on the bases of each support column. The archway entrance resembles that at Lane Stadium.

Plus, the university’s core values – brotherhood, honor, leadership, sacrifice, service, loyalty, duty, and Ut Prosim (Thay I May Serve) – have been etched along the bases of the columns. Architects borrowed this feature from the Pylons above War Memorial Chapel along Tech’s Drillfield.

An award presentation will be held in November 2016 in Tysons Corner, Virginia.

The project will also be submitted to the National Design-Build Institute of America 2016 Design-Build Project/Team Awards competition. Learn more about the facility.