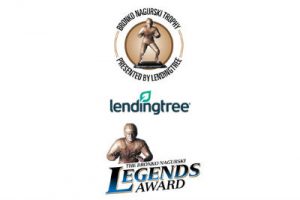 The Football Writers Association of America, in conjunction with the Charlotte Touchdown Club, released its preseason watch list for the  2020 Bronko Nagurski Trophy presented by LendingTree today.

The list includes 98 defensive standouts from 66 schools in all 10 Division I FBS conferences plus independents on a roster that includes five returning players from last season’s FWAA All-America team and one from 2018.

Seven schools are tied with three representatives each, including Pitt, which in addition to Twyman has defensive end Patrick Jones and safety Paris Ford to lead the Atlantic Coast Conference’s 17 players that top the conference totals and hail from 11 of its 14 schools. Defending national champion LSU has defensive tackle Tyler Shelvin and safety JaCoby Stevens in its trio alongside Stingley Jr., and Alabama and Georgia also have three players as part of the Southeastern Conference’s crew of 15. Oregon, USC and Washington also have trios on the list from among the Pac-12’s 13 players that also includes Washington State’s Jahad Woods, fourth in the nation in tackles last season with 141.

Players may be added or removed from the watch list during the course of the season. As in previous years, the FWAA will announce a National Defensive Player of the Week each Tuesday this season. If not already on the watch list, each week’s honored player will be added at that time. The FWAA and the Charlotte Touchdown Club will announce five finalists for the 2020 Bronko Nagurski Trophy.

The winner of the 2020 Bronko Nagurski Trophy presented by LendingTree as the National Defensive Player of the Year will be chosen from those five finalists. The FWAA All-America Committee, after voting input from the association’s full membership, selects a 26-man All-America Team and eventually the Nagurski Trophy finalists. Committee members, by individual ballot, select the winner they regard as the best defensive player in college football.

This year’s watch list includes at least four players from all 10 FBS conferences plus three from the independents. The ACC led the conference list with 17 with the SEC (15) just behind, making up almost one-third of the list. The Pac-12 (13), Big 12 (12) and Big Ten (10) also have double-digit representation, followed by Conference USA (7), the American Athletic (6), Sun Belt (6), Mid-American (5), Mountain West (4) and Independents (3). The list includes 31 linebackers, 28 backs, 23 ends and 16 tackles.