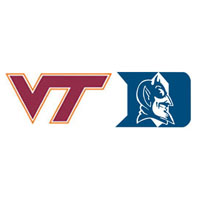 Virginia Tech turned three Duke turnovers into 17 points, and Blue Devils placekicker Ross Martin missed a 40-yard field goal with 2:26 to go, allowing the Hokies to escape with a 17-16 win in Wallace Wade Stadium in Durham, N.C., on Saturday.

A pair of Martin field goals would give the Blue Devils a 16-7 lead, and a Brewer interception in Virginia Tech territory seemed to open the door for Duke to take control, but Boone was hit on a third-down pass attempt, and Derek Di Nardo plucked the ball out of the air and returned it 51 yards to the Duke 8.

The Hokies had to settle for a 35-yard Joey Slye field goal on the final play of the third quarter that cut the deficit to 16-10. Then on the ensuing kickoff, Duke returner DeVon Edwards fumbled, and Dahman McKinnon recovered for Virginia Tech at the Duke 31.

Five plays later, Brewer connected with Bucky Hodges on a 15-yard TD pass that gave Tech its first lead of the afternoon.

Duke took advantage of a failed fake punt to get the ball to the edge of the red zone in the final three minutes, but Martin, who had not missed a field-goal attempt all year before missing a 51-yarder in the second quarter, was wide left from 40.

The Blue Devils defense forced a Tech punt, giving the offense one last chance, but the Hokies defense held on a fourth-down pass to end it.

Virginia Tech won despite a subpar day from its offense, which generated only 293 yards. Duke gained 324 yards total offense, but the three turnovers were backbreakers, and Boone had a pedestrian day throwing the ball, completing 19 of his 41 pass attempts for 185 yards.